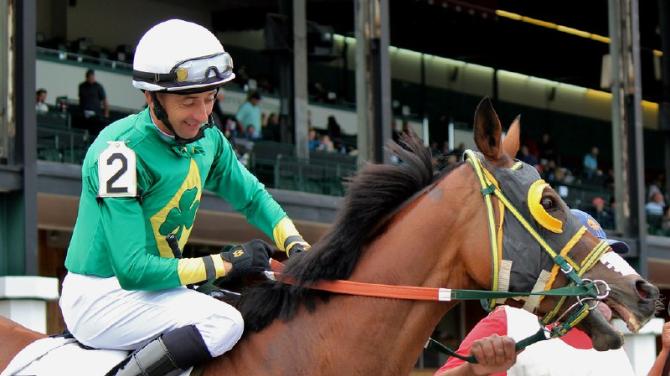 A JOCKEY who grew up in Newpark in Antrim is fighting back from his injuries after a horrific fall last month.

Vince Halliday was injured in a serious accident during the last race at Delaware Park on July 15.

His mount clipped heels and somersaulted over him, and then they both were trampled by another horse.

Vince is now in the ICU at Christiana Hospital with significant and life-altering injuries, including two brain bleeds, fractured scapula, multiple thoracic fractures, including a compression fracture of the T7, fractured C4, fractured elbow, sternum and many more.

However he has continued to improve, having a breathing tube removed just over a week since his accident.

He has also been able to, via a sling, move in to and sit in a chair and has been able to stand unaided.

His wife Stephanie has been at his side and is relentless in aiding his recovery and encouraging Vince to stay strong.

“Anyone that knows Vince will not be surprised to learn that he asked about the well-being of ‘Tua’ the filly that fell with him, Vince was happy to learn she will be okay.” she said.

Two fundraising platforms have been set up to help aid Vince’s recovery, and over 40,000 dollars has been donated already.