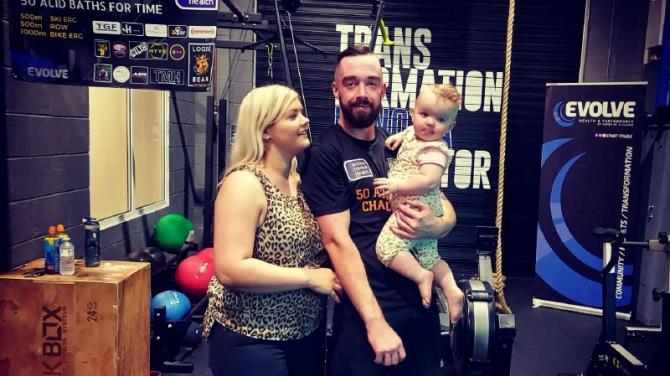 AS extreme fundraisers go, Daniel Logan from Rathenraw has taken the biscuit, by completing 50 ‘acid baths’ for charity - but it’s not quite as painful as it sounds!

Last year the he raised over £1,000 for Action Mental Health by rowing the length of the English Channel - completing the 26.2 mile course on this side of the Irish Sea on his machine in a frankly incredible three hours and 26 minutes.

Lockdown has been a tough time for charities, with events seriously curtailed - at a time when demand for mental health services has soared.

So Daniel decided to re-enter the lion’s den by unveiling another epic fundraiser - the Acid Bath Challenge!

Thankfully no corrosive liquids were involved, but the local man was undoubtedly feeling the burn.

And Daniel did it 50 times in one exhausting sitting.

He set himself the target of eight hours to complete this Herculean task, and he streamed his progress live on Facebook and Instagram on August 21.

Daniel hoped to raise £500, with all the cash going to a cause close to his heart and he smashed his target, raising well over £1,000.

He also smashed his time target, coming in at just under seven hours.

“It’s 25 per cent higher than in England.

“More than 70 per cent of people who die by suicide are unknown to mental health services - and half of these problems start before the age of 14.”

And that’s were groups like Action Mental Health come in.

“They can support local people’s mental well-being through their recovery services which offer support, vocational and employability programmes.

“In addition to this. they offer programmes in schools and in the community to build a more resilient youth, foster healthier work places for the future - and ultimately create a more caring and nurturing environment for generations to come.

“As a charity very close to my heart, I would like to raise £10 for every Acid Bath that I complete, in turn raising £500, as well as raising awareness of mental health in the process.”

Speaking after the challenge was completed, he said: “That was one of the hardest things I have ever had to endure in my life, after about round 20/25 it was just a head game until the finish line!

“My body started to give up before my mind did with constant cramping, it might not have looked pretty but we got there in the end!

“Thank you to each and everyone who dropped into the gym to cheer me on, brought sweets and treats, beers and Buckfast and to those who dropped me messages of support the response was overwhelming!

“I managed to raise over £1,000 and I can not thank you all enough for donating to a charity that is so close to my heart.

“All proceeds will be used for anyone suffering from mental health issues in the Antrim area.

“I appreciate each and everyone of you massively!”