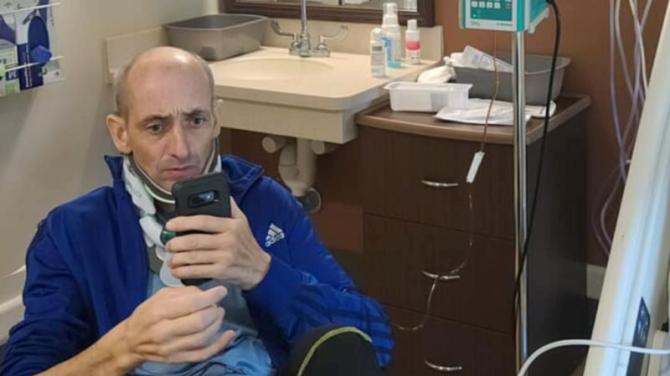 A JOCKEY who grew up in Newpark in Antrim is continuing to back from his injuries after a horrific fall last month - and is now able to take small walks outside seven weeks later.

Vince Halliday was injured in a serious accident during the last race at Delaware Park on July 15.

His mount clipped heels and somersaulted over him, and then they both were trampled by another horse.

He was unable to breathe on his own for two weeks and for a while it was feared he wouldn’t survive.

However he has continued to improve and this week wife Stephanie posted a video on social media of Vince taking a stroll around hospital grounds on a walker.

He has been getting medical attention for the last four weeks at Christiana Hospital in Newark, Delaware and has moved to a rehabilitation unit.

“Vince spent two weeks in the ICU and then as soon as he got off the ventilator he moved to the trauma step down unit,” said Stephanie.

“He was steadily progressing apart from being able to swallow so he had a stomach feed tube inserted last week.

“However he had some complications due to the new stomach tube and ended up back in ICU for two days.

“He came back to trauma step down this past Sunday and has kept progressing so today he is being discharged from the hospital and is moving on to acute rehab where they will work on his swallowing as well as general physical therapy.

“He is able to walk with assistance, but is just weak.

“So the next chapter of his recovery begins. He should be in rehab for seven to ten days.”

Two fundraising platforms have been set up to help aid Vince’s recovery, and over 40,000 dollars has been donated already.