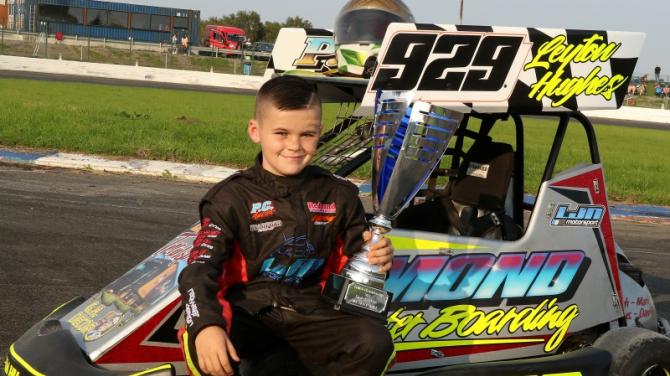 Back in July, Leyton (pictured right) won the National Championship on home soil at Aghadowey Oval, and he continued his dream season when he made the long trip to the Birmingham Wheels circuit for the British showdown.

The Round Tower Integrated Primary School pupil carded a win and a second in his two qualifying heats to take pole position for the all-important final, and then set a blinding pace to race home to the chequered flag and the British Championship crown.

Back in June Leyton's Dad Conor won the 2.0 Hot Rods British Championship in Scotland, making it a fantastic family double for the Antrim duo.

Both now sport the black and white chequered roof which denotes British Champion on the oval racing scene.

Later this month both Conor and Leyton will head off to the prestigious Ipswich Spedeweekend, where Leyton will contest the World Championship for the Ninja Karts while Conor will battle for European Championship honours.

Both have honed their skills on the local DMC Race Promotions circuits at Aghadowey Oval and Tullyroan Oval, and before the season ends will have Irish Championship showdowns to contest too.

Leyton has proved almost unbeatable on the local scene this season - he really is a superstar in the making!