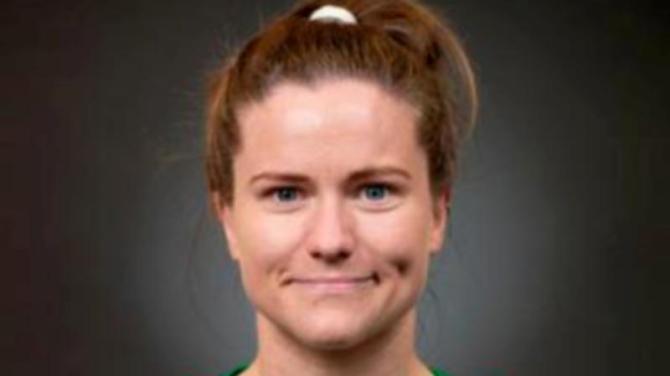 AFTER a glittering career, Shirley McCay has decided to call time on international hockey following an unforgettable 14-years with the Green Army.

And her record really does speak for itself, with a record-breaking 316 caps, eight European Championships, a World Cup and an Olympics under her belt!

Tributes have been paid this week by some girls in green much closer to home, where Shirley once played.

“What an amazing career, from all of us at Randalstown Hockey Club,” said a spokesperson.

“We wish Shirley McCay all the best for the future.”

The diminutive defender was blessed with an eye for a glorious long pass, and could be relied upon to contest every opponent and situation. indeed, her passion and perseverance stand her out as one of the iconic faces of the Green Army’s rise.

During her time, the side rose from obscurity to the world’s elite levels, a journey culminating in the 2018 World Cup silver medal and a maiden appearance for the Irish women at the Tokyo Olympic Games.

While she has dabbled with the idea of retiring on a couple of occasions in the past few years, she feels the time is right following the Olympics for her to step back and “go all in” to guide the next generation of stars through her work as an Ulster Hockey performance coach.

Her beginnings in the sport came at Omagh Academy, picking up the basics of the game in jig-time, breaking into the senior team at the school when she was just 14. She would be a guiding light in Omagh’s sole Kate Russell All-Ireland Schoolgirls success in 2005.

Omagh Hockey Club soon came calling, “loving life” on the fourth team and enjoying the ride up through the teams before giving some of Ulster’s big guns a run for their money.

There, her development was overseen with Anne Buchanan, Iris Nelson and June Graham crucial figures who became almost ever-present supporters at European Championships – eight in all – among other competitions.

It helped propel her to new heights on the club front, first with Randalstown and then with Ulster Elks – with whom she would win two Irish Senior Cup crowns – KHC Dragons in Belgium, Old Alex and then to Pegasus where she became an EY Champions Trophy winner.

Gene Muller invited her onto the international stage at the age of 18 for a series in Stellenbosch in January 2007. Since then, she has been virtually ever-present, missing just 37 of Ireland’s capped games in 14 and a half years.

Those early days were tough at times with Olympic and World Cup qualification proving well out of reach. Nonetheless, McCay was hooked on the journey and embraced the chance to travel the world, playing the sport she loved and while material success was elusive at the time, there were always moments to last a lifetime.

“In my early career, beating New Zealand in New Zealand [Wellington, 2008] was a special memory. Anytime we could get the better of someone above was a special moment and that was unheard of at the time. Thankfully it became more regular over time but I will never forget that.

“Another eye-opener was playing Argentina in Parana [in 2011] and about 10,000 people must have shown up and gave us an incredible reception. It’s things like that which stay with you, not always the big results but those amazing moments.”

During those early years, she hails the likes of Eimear Cregan, Linda Caulfield, Cathy McKean and Bridget Cleland for bringing her under their wing.

She remembers McKean ‘just telling me how class I was’ at some early sessions, adding to ‘get something like that from such a good player was special’ to hear.

As time went on, though, reaching the top table seemed to draw closer and closer, going within one result of reaching both the 2012 and 2016 Olympics.

And the breakthrough finally arrived via the World League in 2017, fighting back to beat India to earn a place in the 2018 World Cup.

Prior to that tournament, media reports suggested that would be her last run out in an Irish jersey. Indeed, she very much thought it was going to be the end, a suitable pinnacle after 11 years on the road, before the silver medal run changed everything for everyone involved.

“Getting over the Rio disappointment, it kind of felt like there would never be a bigger stage to go out on a high. Then things turned out the way they did, a way no one expected it to. With the silver medal, it gave us a much better ranking and a chance to qualify for the Olympics. I did not want to leave with any regrets for me or the team having come so far.”

And, of course, that dream was realised in November 2019 with qualification in front of a record crowd at Donnybrook Stadium, a lifetime away from the many years of empty stands and endless unseen effort. Those fixtures took on an extra significance as they marked her 300th cap while she cites walking out and signing the anthem with her nephew Alex as an extra special moment.

Her efforts in the background went on for an extra year due to the Covid-19 pandemic before eventually coming to fruition in July this year.

The side started off in brilliant fashion, breaking their duck with an historic 2-0 win over South Africa. Ultimately, a vital second win proved elusive and their campaign ended in the group stages.

“We were disappointed in regards to reaching our main target of reaching the quarter-finals. We had the capability of doing it but each team had those same dreams and that it why this is the toughest tournament.

“Even South Africa, with their limited preparation, showed some excellent hockey and there absolutely no easy games. Sure, the outcome was disappointing but the whole Olympic experience was filled with massive bucket-list moments.”

While the tournament was her curtain-call from the international playing scene, she knows she will not be too far from a pitchside anytime soon.

Indeed, she dove straight back into camps in her role as an Ulster Hockey Talent Coach and, last weekend, she was part of the coaching staff that saw Ulster win double-gold at the UK Schools Games. And she is thrilled at the prospect of inspiring the next generation on that front.

“Ulster Hockey have been so sympathetic to me and my international career, letting me do bits and pieces in between when I was away. I have been so used to trying to balance playing internationally and the role.

“So I am really looking forward to going all-in, committing to the job and making a difference, helping Ulster’s young talent develop and play to their potential.”

That role leaves her now in a peaceful position to step away from the international stage, paying tribute to her network who helped propel her to such spectacular heights.

“I am indebted to a few people who without their support I wouldn’t be where I am today. My friends, family and loved ones, thanks for putting up with me being grumpy and rarely being around.

“To the coaches I have had throughout my career, I have learnt so much from you all. To our sponsors, SoftCo and Park Developments in particular, thank you for helping prolong an old girl’s career and joining our journey.

“And finally, to every team mate I have ever had the pleasure of playing with, thanks for putting up with me. It has been an honour.”