Leyton is on top of the world! 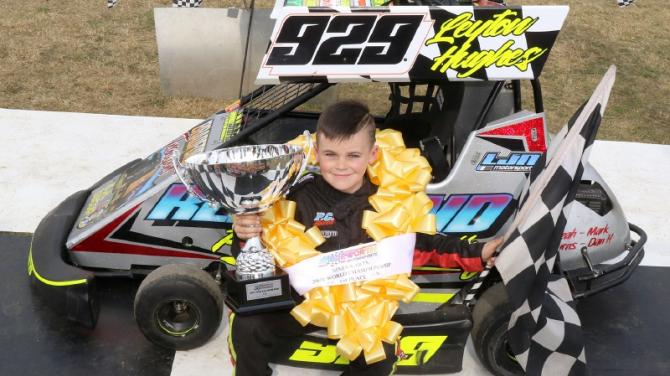 Against the best racers from far and wide, Leyton took them all on at the famous Foxhall Stadium in Ipswich, Suffolk to land the coveted title.

The nine-year-old Round Tower Integrated Primary School pupil has had a fantastic summer on the oval racing circuits, winning no less than three major titles.

Back in July at the Aghadowey track near Coleraine he won the National Championship, before he raced to victory in the British Championship in Birmingham during August.

The World title is the biggest prize of them all, and Leyton duly produced the goods in front of 8,000 fans at the annual Ipswich Speedweekend.

In the qualification heats, Leyton managed to win the first one before taking ninth in heat two from the rear of the grid.

That left him in third place on the grid for the World Final race, but he quickly swooped past his rivals.

On lap three he hit the front and never looked back until he took the chequered flag.

Leyton now earns the right to carry the gold roof and wing on his Kart for the next 12 months.

Only two Ulster drivers had qualified to contest the World showdown, and sensationally Leyton's friend Ryan Berry from Portadown came with a late burst to grab second on the line for a Northern Ireland one-two.

Leyton is back in action at Tullyroan Oval near Dungannon on October 2nd for the prestigious Keir Millar Memorial Trophy, and also has the Irish Championship in his sights before the end of the season.