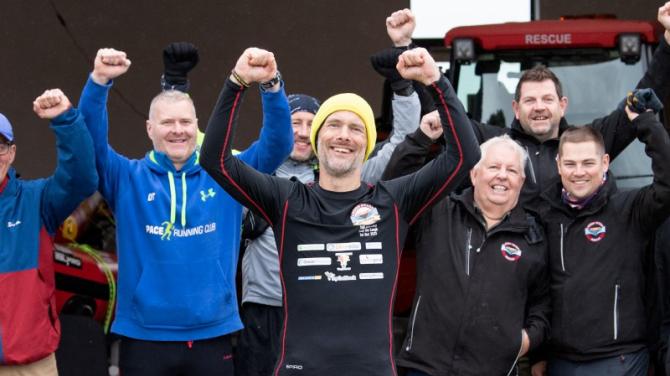 A LOUGH Neagh Rescue volunteer who spent his weekend running around the largest lake in the British Isles visiting each of the three lifeboat stations has raised almost £5000.

Kyle Johnston from Muckamore took off from Titanic Belfast on Friday, flanked by LNR vehicles and embarked on ‘a 100 mile run all alone around a big puddle in the middle of Northern Ireland’, stopping off at Ardboe and Kinnego before arriving to a crowd of cheering well-wishers at Antrim lough shore.

He was joined by other runners at various points of his run.

For the past three years Kyle has been a volunteer life boat crew member and Swiftwater Rescue team member for Lough Neagh Rescue.

“LNR relies on donations to keep the charity running and also to ensure we have the correct equipment needed to help save a life when the situation requires.” he said.

The distance covered equated to around four back to back marathons, which he undertook in 24 hours.

The local man said it had been a memorable journey.

“It was a very windy start at the Titanic Building although bright and sunny.

“I was joined about mile seven by a couple of runners from the Antrim Road area only one of whom I knew and the others were members of the public who had seen the event on social media.

“I then headed to Antrim Station where I met with my support crew. I couldn’t help thinking as I ran towards the station that I would be on the same road running to the same station 18 hours later - which wasn’t a nice thought at all, especially as I had been battling 40 mph gusts for the last three hours!

“I had a cyclist and van support from Antrim crew with me until I reached the Ardboe Station and was joined along the way in the dark by a Fire Service NI runner and Adrboe support crew to just past Maghery. The roads on the south of the Lough were unknown to me so having guidance and company were both a big help.

“The night was cold but dry and a bit easier as I couldn’t see what terrain was in front of me, or how long the road was ahead so mentally this was better.

“The back roads to Kinnego Station were undulating and a ‘walk the hills and run everything else’ strategy was required.

“I was joined by a fellow ultra runner Johnston Kirkpartick from Doagh who was scheduled to stay with me until 6am but he remained by my side until Antrim, which was a massive help.

“Leaving Kinnego my stomach wasn’t in a good place and I wasn’t really able to eat very much from then on, only take on board fluids! I was now running from lamp post to lamp post rather than thinking about what village or town was next.

“We had people stopping when there was daylight giving us money out of car windows and in the street which was amazing.

“The last 20 miles were about as bad as they could have been physically partly because I could see the road ahead and partly because the surroundings were more familiar and I knew just how far I still had to go.

“I arrived back at Antrim station to a blaze of sirens, support runners and members of the public who were clapping and cheering as I rounded the carpark at the Antrim Forum.

“It was finished, the torture was over. I was mentally and physically exhausted.

“The only missing pieces were my wife and two boys Rhys (12) and Rudy (9) who were both busy playing rugby matches!

“On Sunday morning I was sitting at 6am at home in a haze of tears, pain, exhaustion and Ibuprofen amazed humbled and overwhelmed at the support shown to this fantastic charity for whom I am blessed to be associated with.

“The effort and sacrifice of the crew from Friday when this run started allowed me to finish - without everyone involved helping and the support of the public I feel the outcome would have been different.

“A massive thanks also to Paul Johnston, dad and mum for coming to see me somewhere near Crumlin. A few quiet tears were shed after that.

“I am a broken man. Walking properly will have to wait for a couple of days, my knees feel like they are being held together with dried out elastic bands. There are a few blisters underneath my toe nails, the pressure of which is pushing my nails off...

“My hair is about the only thing that doesn't hurt, and that's because I don't have any.

“Claire K Farrier, thank you for bringing me home from the station.

“My wife Liesa had the pleasure of listening to me moan in pain while drifting in and out of consciousness through the night.

“It’s now Monday and I am slightly more human again, back at work and can’t believe we have managed to almost raise £5k – a few more quid and we will be there! – same time next year?”