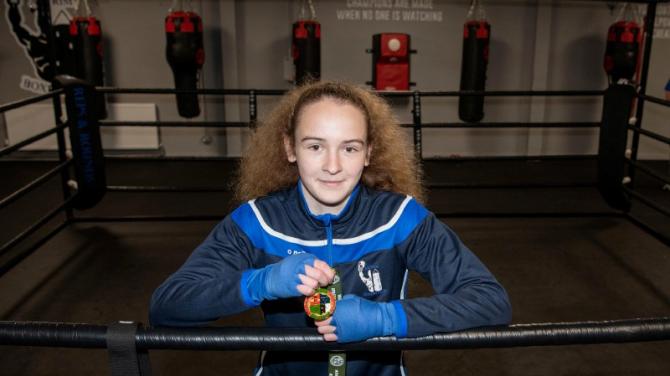 ANTRIM boxer Nicole Clyde is celebrating after being invited to the Irish Elite training camp.

Nicole (18), from Antrim Amateur Boxing Club, recently had a respectable performance at the National Stadium in Dublin for her first Elite National Championships.

She won the ‘battle of the Nicoles’ in the first fight of the afternoon.

The 2019 under-18 champion and European Youth competitor defeated Togher’s Nicole Hayes via a unanimous points win.

However Immaculata’s Caitlin Fryers took the women’s 50kg title over Nicole in a thrilling contest in a unanimous decision.

However her performance has now led to an invite to train with the Irish Elite Senior High Performance Unit.

“Covid slowed everything down so it has been great to get back training and back into the ring and see everyone,” said the former Parkhall pupil.

“My family and friends have been brilliant support. My Mum was waiting outside the stadium as only a certain number of people were allowed in and my friends live streamed the whole thing and were cheering me on.

“I might not have come out on top this time but it was a brilliant experience and I am delighted to have been invited to the camp as this could lead to bigger and better things.”

Nicole said that there has never been a better time for women to explore boxing as a hobby or sport.

“I think there are definitely more women in boxing compared to when I started out, back then it was hard to find anyone to fight with, but the sport has developed so much and women are realising that it is for them too.

“It’s a brilliant way to keep fit and socialise and I would encourage anyone to give it a go.