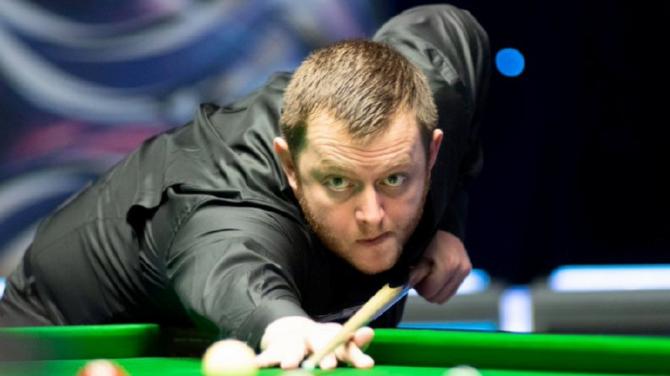 ANTRIM cueman Mark Allen has hit his second 147 in competitive play at the Northern Ireland Open in Belfast.

‘The Pistol’ said he was thinking of his fans when he completed his remarkable break on Sunday.

The home favourite made his move in the final frame of his 4-1 victory over Si Jiahui at the Waterfront Hall to send the crowd into raptures.

“That’s honestly right up there with anything I’ve felt in the sport,” Mark said, soon after wrapping up the round of 128 success with a superb 147 break.

“Not just to make a 147, but to do it here in a tournament that means so much to me in front of my family and friends and people who have supported me all my career – to give them that buzz as well – it’s a memory I’ll hold for a very long time.

“I had a couple of tricky ones on 73 and then 80, and then I kept good control until the last black when I went up for the yellow, and I over hit it by two feet.

“I potted a good yellow and even from there it wasn’t plane sailing, I had a horrible brown, and at the last you can only really fall apart on that black.

“I felt I had to hit it at some point as I couldn’t stop shaking, so I just let the arm go through to see what happens and I potted it – I can’t believe what I’ve actually done.

“I was thinking that as the break went on, I wanted to do it for the fans as I haven’t given them anything to cheer about here since we came back in 2016.

“To give them something back for all their anguish of watching me for years, it means a lot to me. I don’t remember Alex Higgins or Dennis Taylor ever doing it – and Jordan Brown will never do it – so it’ll be nice to be that one person from Northern Ireland to actually do it, especially in his home arena.”