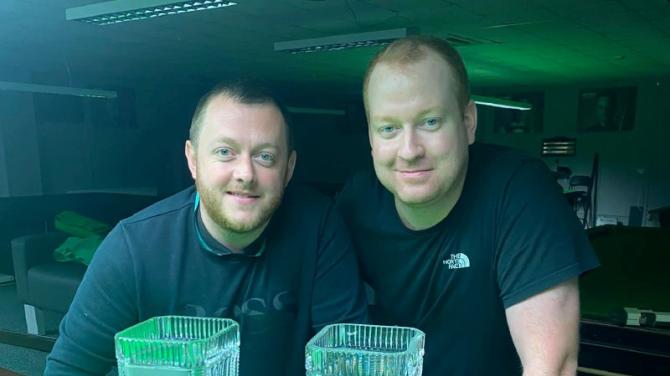 THE newly crowned Northern Ireland Open champ has conceded that ongoing legal disputes may mean that he will not pocket a penny of his £70,000 winnings.

In a typically candid interview, Antrim ace Mark Allen added that his future in the game he loves remains in some doubt - hinting that he may be unable to follow in the footsteps of his hero Alex Higgins and bring the World title back to Ulster.

The former Masters champion has been embroiled in a series of legal entanglements including declaring himself bankrupt and separate proceedings for divorce and child support.

That he managed to nevertheless deliver a tour de force to take the last three frames to be beat John Higgins 9-8 was an astonishing display of nerve.

“It has been a tough time away from the table but a lot of the things that have been going on the last 18 months have put things in clear perspective for me,” said Mark.

“I realise how much I love the sport even though I am not sure for how long I am going to able to play - it is out of my hands now, there is a threat of possibly not being able to play going forward.

“It has made me appreciate snooker and how much I love competing. I feel like I have got the game to compete against the very best.

“And to win a big tournament with all that stuff going on in the background I think shows where I am at mentally – in a good place.

“It would be great if I could continue to play for a lot of years to come and I do believe I have the ability to bring back a world title back to Northern Ireland.

“It is tough – and you only get one chance a year. Alex Higgins did it twice and Dennis Taylor did it once.

“Snooker wouldn’t be where it is today if it wasn’t for the likes of Alex Higgins and Jimmy White. They were the benchmark in the 70s and 80s – rock stars really.

“They took snooker to new levels and obviously being from Northern Ireland I am very proud of that history, and looking to follow in Alex’s footsteps.

“To be honest winning this title and the financial ramifications makes no difference over whether I continue to play or not. That is out of my hands.

“I am not sure I am going to get any of the prize money I won for the title, or play in the next event. But I still dug deep and never gave up.

“I believe I can win a world title. There isn’t much difference to being able to win the other tournaments. It is the same players, just a longer distance.

“There is no reason I can’t do well at the Crucible. I haven’t got a great record there, but I didn’t have a great record in Belfast and I have won the title and turned that around.”

South Antrim MP Paul Girvan said the local man’s legions of fans wanted to see him prove that he is the best in the world.

“We in South Antrim are extremely proud of our local hero,” he said.

“On behalf of the people of South Antrim, I offer my warmest congratulations to Mark.

“It was fitting that fans could once again return to the Waterfront to witness this momentous occasion. We look forward to cheering him on to further success this year.”