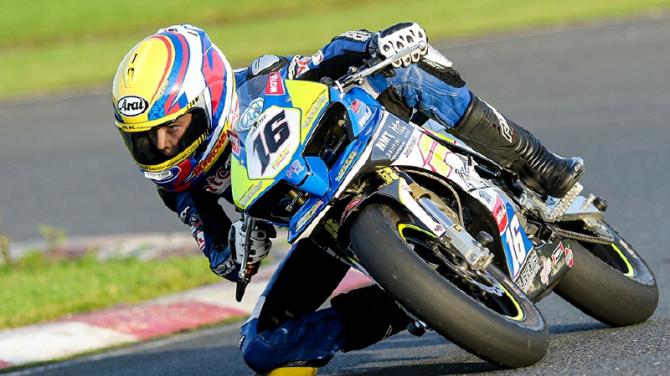 THE curtains came down on the 2021 Irish Minibike Championship with a doubleheader at Nutts Corner, in what was one of the best weekend’s racing witnessed in a long time.

It included impressive showings from the stars of tomorrow, amongst them, 12-year-old Jack Burrows.

Incredibly, 19 years after his dad scored a five-timer at Nutts Corner, Jack did likewise at the final rounds of the 2021 Irish Minibike Championship series!

For rookie Jack Burrows, it was the perfect weekend - pole position, five wins from five starts, and the Knipes Butchers Star rider of the day on Saturday.

All things considered, not bad going for a young rider, who six months ago, had not put his leg over a minibike!

It was at the Knock club’s NK Coating Enkalon Irish Clubman's short circuit meeting, where dad John, won five races in a day, a feat that has never been repeated since.

In the Junior Elite four-stroke series, it was Reece Lennox who scooped the honours, with Alex McCalmont suffering a last-lap crash in his efforts to demote Lennox. Third went to Matt Davidson.

Buster Sherman Boyd competed yet another Rookie season, ending up as a champion.

Buster staved off the close attentions of the second-place finisher, Freddie Cooke, who unfortunately suffered engine problems in race two, allowing Matt Davidson to snatch second place in the championship.

In a 100 per cent winning record, Max Robinson is the 2021 VW AUDI BITZ BamBam Champion - however, at the final two rounds, he was hard-pressed by Tommy Ferris and two newcomers, to keep an eye on for 2022, Joel Haire and Zak Turkington, both coming from junior motocross.

Having missed out on the King of the Corner feature race at the beginning of the season, with nine wins during the season, Gary Wilson made up for it, by clinching the hotly contested Eurol Lubricants supported 140 stock A class heading home James Thompson and Nathan Ingram.

In the Martha Beatty Memorial 140 B class, it was Graeme Compton who took this closely fought championship from Alan Mairs and Adam Carr.

Craig Anderson who was also in contention, saw his chances wiped out in a last-lap crash in the opening race on Saturday, resulting in a broken collarbone

In the David Beatty Supported open class, it was James Thompson who secured the championship from Christopher McCallion and rookie Nathan Ingram.

In a well-supported Scarlett DIY supported Vets race, it was Kelan Smith who took the honours over the weekend and in doing so overhauled himself to the top of the points table from Eoin Smith, with Stuart Temple taking third in the Championship.

The autumnal weather, with a low sun in the afternoons, and leaves rustling around the circuit witnessed a massive crowd of spectators, amongst them, was former Formula Two world champion Brian Reid, who was ‘blown away’ by what he was watching.

Sponsor to up and coming BamBam rider Joel Haire, Pete Eaton, of Two-Stroke Racing, travelled from the mainland to watch his junior rider in action, but ended up staying for both days!

Speaking to the Club, before the prizegiving, he congratulated the club, for giving him the ‘best weekend’s entertainment in years’.

“I was only over for a day, but the racing and clockwork organisation on Saturday persuaded me to stay for Sunday,” he said.

“And I’m glad I did. Such a friendly bunch of people I’ve met over the weekend.

“I will certainly be putting more IMC meetings on my race calendar for next year.”

The BBC camera team were back again on both days, filming for a forthcoming program, which will be aired before Christmas - proving just how popular the Irish Minibike Championship has become in its short four years of action.

The organising club also put on a party on Saturday evening for the Junior riders.

On reflection, it was a perfect weekend.

There was perfect weather, despite the unsavoury forecast; perfect close and exciting racing throughout each class; and it was the perfect platform for the promotion of Minibike racing in Ireland.