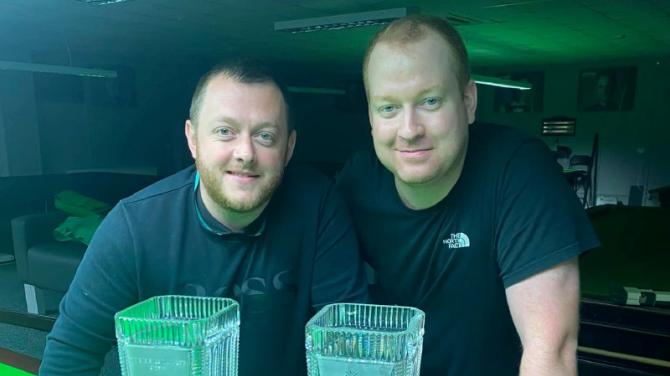 ‘The Pistol’ shocked the sport when he pulled out of defending his coveted Champion of Champions crown at last week’s illustrious invitational event in Bolton.

Allen was due to defend his invitational title at this year’s tournament, running from November 15-21 at the Bolton Whites Hotel.

“Gutted to be missing one of my favourite events,” Tweeted Masters legend Allen.

“Apologies to anyone who was coming to see me, good luck to all involved.”

The Antrim cueman had already hinted that he was having personal problems following dramatic final-frame victory, hinting that he was unsure if he would get any of his £70,000 prize money for winning the event.

Allen declared himself bankrupt in May, is undergoing divorce proceedings from wife Kyla and is also locked in a dispute with his former partner Reanne Evans, the record 12-times world women's snooker champion, over maintenance payments for the couple’s daughter.

After losing to Mark Selby in the second round of the World Championship in April, Allen said that he may have to take time away from the sport because of his off-table difficulties - but bounced back to clinch the sixth ranking event title of his career.

Welsh Open Champion Jordan Brown, who honed his skills at the 147 Club on Fountain Street alongside Mark, before the pair moved on to Antrim Sports Club, said he hopes his friend will not have to put down his cue for good.

“I don’t want to see him forced to leave the sport,” said Brown.

“Let’s hope he doesn’t have to quit because he’d be a huge loss to the game.

“Things are obviously bad if he’s thinking about that. It’s out of his control.

“Snooker needs someone like Mark because he brings a lot to the game.

“Personality wise and his style of play, he’s one of the best players on the tour.

“Let’s hope he comes out of the other side of this and it doesn’t get that bad.

“I wish Mark well, I’m a very close friend of his, I practice with him a lot and I’m always there for him if he needs me.”

Brown himself went out of the Bolton event at the first hurdle.

The former Islandbawn Stores employee, who went professional in 2018, admitted that he ‘didn’t do himself justice’ in the competition.

The world number 33 said: “There were a few missed opportunities that I’ll have to learn from

“I didn’t do myself justice out there.

“I’ll learn from that because I feel I belong with the big boys out there.

“I’ve already proved it by beating Ronnie O’Sullivan in a final to get here, it doesn’t get much better than that.

“I want more of those opportunities and I’m doing everything I can to ensure I get them.

Brown missed a pink to win the first frame and found himself 2-0 down after Wilson pocketed a 59 break.

Brown hit back with a 56 run of his own before the former Shanghai Masters champion reclaimed his two-frame cushion with a match high 89 visit.

Brown once again pegged Wilson back but missed a red when set to send the match to a decider as the English potter made a match-winning 71 to reach the quarter-finals.

And frustrated Brown added: “It was an absolute privilege to be a part of this event.

“The one thing I’m gutted about is I didn’t force it to a decider because I felt good.”