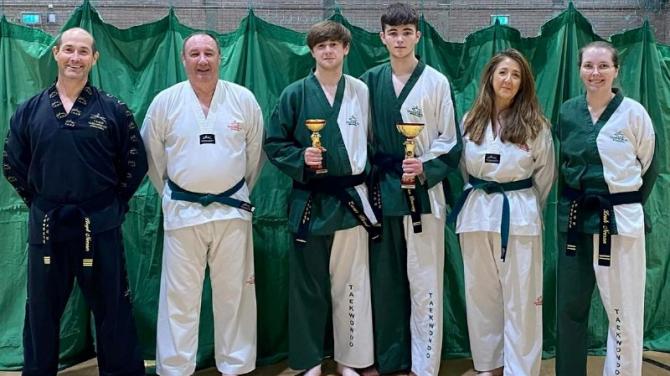 There were over 3,000 people in attendance, including 1,200 Taekwondo students from across the UK who had gathered to compete in the Patterns, Sparring and Team events.

Six members from Antrim TAGB were there too - and they certainly made their presence felt!

All performed well, but the Antrim Club achieved two magnificent results - a Bronze for Ewan and Gold for Dylan!

Ewan and Dylan both competed in the same Sparring Division, the Black Belt Heavyweight Cadets U18. It a a very large division consisting of 12 top students fighting for the honours.

Sixteen-year-old Ewan moved up from the U16 division, and this was his first attempt fighting in the U18 Cadets, though you would not have guessed it. He had no fear and eventually achieved a fantastic third place for his determination and grit.

Dylan showed his ability from the outset and was on top form during the bouts.

He overwhelmed and destroyed all of his opponents to secure a well deserved place in the final.

Dylan produced another assured display in that showdown to make sure neither the occasion nor his opponent got the better of him to be crowned British Champion 2021 in superb style!

Dylan also achieved the U16 British Title when he was 14-years-old.

That’s back to back British titles - a fantastic achievement to have on his Taekwondo Fighting CV.