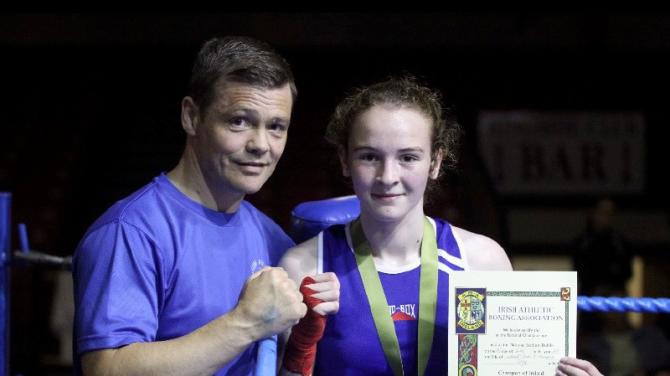 The event, organised by the Ulster Boxing Council, took place at the Girdwood Community Hub.

The opening fight of the night was the women’s 48kg final where Nicole just had too much quality for Canal’s Chloe Fleck in the 48kg final.

The Ulster Boxing Council said: “No one deserves more credit than the boxers, clubs and coaches.

“Thank you to all who came to spectate and support their boxers, also a big thank you to the officials who always go above and beyond to keep everyone and everything right.

Nicole (18) started boxing when she was 10-years-old back in October of 2012 and is a member of Antrim Boxing Club which is based in Springfarm.

She entered her first championship in October 2014, the Ulster Novice Championship in Bainbridge, she weighed in at 46 kilos but was unfortunately there was no suitable opponent.

With no contest, she received the Ulster title in a walkover.

During her first year of competition, she entered many different Championships from the County Antrim Novices to the Ulster Novices and various Open Competitions, but was unable to get a contest due a limited number of girls taking part in the sport not being the same age or weight as her.

Going into her second year of competing in the 2015/16 season, she was able to get more and more contests and took part in the Ulster Open, Belfast Open and then went on to win the County Antrim Open.

These successes led her onto qualifying for the All Ireland finals.

Her first All Ireland competition was a real test where she was drawn against the Irish Champion in the Quarter Final.

At this fight she put on a good show, but was unfortunate not to receive the decision.

This was a great experience which set her up really well for the 2016/17 season, where she took park in the Esker International Female Box Cup, Ulster Open, Belfast Opens, County Antrim Opens and then the Irish Junior Championships where she came out as the winner in all of these.

During this season, she also represented Ulster twice and Ireland at International Level.

Her 2017/18 season was no so successful, but she still came away with titles in the Belfast Opens and claimed the titles at the County Antrim and Ulster Championships.

In that season, Nicole was unfortunate to be beaten by an Irish Champion in the Irish semi-final.

Her 2018/19 season was a huge success, winning the Esker International Cup, Belfast Opens, Ulster, Co. Antrim and an Irish title all at 52 kilos.

During the summer of 2019 she competed in the Irish under 18 Championships when she was only 16 and was the youngest in her category.

Not expected to take the title, Nicole won the semi-final in a unanimous decision, putting her into the final where she was stopped in the third round.

She was then invited down to the Irish High Performance Training event, where she later found out that she was going to box in the European Championships for Ireland over in Sofia Bulgaria at 51 kilos.

Over in Bulgaria, she missed out on a medal by a whisker.

After boxing against competitors from England, Netherlands, Russia, India and many more, Nicole is now aiming for the opportunity to represent Ireland at as many European and world championships as possible and someday get to go to the Olympic Games.

She is also targeting the Commonwealth Games in 2022 where she could get to represent Northern Ireland.

Nicole was also recently invited to the Irish Elite training camp after a respectable performance at the National Stadium in Dublin for her first Elite National Championships.

From walking into Antrim Boxing Club as a shy schoolgirl, Nicole now has a bright and confident future ahead under the tutelage of coach Eamon Gillen and with the support of her family and friends.

“Covid slowed everything down so it has been great to get back training and back into the ring and see everyone,” said the former Parkhall pupil.

“My family and friends have been brilliant support.”

Nicole said that there has never been a better time for women to explore boxing as a hobby or sport.

“I think there are definitely more women in boxing compared to when I started out, back then it was hard to find anyone to fight with, but the sport has developed so much and women are realising that it is for them too.

“It’s a brilliant way to keep fit and socialise and I would encourage anyone to give it a go.”