Antrim jockey back on the home straight after horror accident 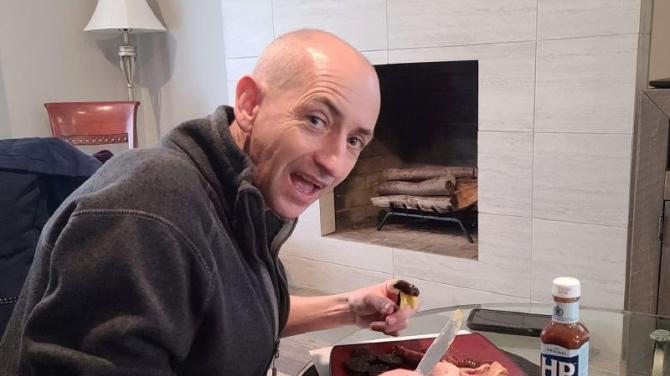 SIX months after the horror fall that nearly killed him, Newpark jockey Vince Halliday is back eating Ulster fries and even getting on his riding simulator as he battles back to health.

Vince started his career in Ireland and England and then moved to the USA in 2008.

In July 2021, Halliday was riding Tua in a maiden claiming race in Delaware, USA, when his mount clipped heels with a horse in front of her.

In the ensuing accident, he suffered fractures to vertebrae in his neck and spine, as well as his elbow and scapula, injuries which left him in intensive care for several weeks.

The pair were trampled by another horse and Vince suffered significant and life-altering injuries, including two brain bleeds, fractured scapula, multiple thoracic fractures, including a compression fracture of the T7, fractured C4, fractured elbow, sternum and many more.

He was unable to breathe on his own for two weeks and for a while it was feared he wouldn’t survive.

However over weeks in the hospital he overcame the complications and was able to return home.

And not only that, the former Antrim man is determined to one day get back in the saddle.

There are still challenges with infections, internal bleeds and swallowing, with several return visits to hospitals, but in recent months, regular social media posts from his loving wife Stephanie have shown him having his feeding tube and stomach peg removed, putting his neck brace in the bin, enjoying an Ulster fry and drinking coffee.

Photos also show him visiting the mall, and touchingly, going back to the stables to be reunited with Tua and even climbing back aboard his Equicizer, a model horse which helps jockeys train for the track, under the guidance of his physical therapist.

Despite being based in America for many years, local people contributed to online fundraisers set up to support Vince and Stephanie as he battled back to health.

Currently, Vince has a number of blood clots, but they are reducing in size and it is hoped his body will deal with them.

It is not the first time Vince has been determined to fight his way back into the saddle - after a 2008 accident left him with multiple fractures, he worked hard to return to riding and he intends to do the same again over a decade later.

As well as the Go Fund Me appeals, Vince has also had support from the Delaware Park On Track Medical and Disability Program, an insurance policy that covers ‘usual and customary’ medical expenses for jockeys injured in on-track accidents at Delaware Park.

All jockeys licensed to ride there pay an insurance fee per mount for the program.

Speaking to The Paulick Report, North America's leading independent horse racing publication, Stephanie said: “The racing community is astounding in the care they've shown us,” Pastore told the Paulick Report. “We have friends from all over, including Ireland and England, contacting us every day to see how Vince is doing.”

“Jockeys, pound for pound, are the strongest athletes,”

“We look forward to the next chapter for Vince.”

Halliday began his racing career as an apprentice to legendary trainer Kevin Prendergast and later spent time working for trainers in the UK, including David Barron and Richard Whitaker.

He rode 51 winners and since relocating to the States has a tally of 45 from competing in more than 1,000 races.