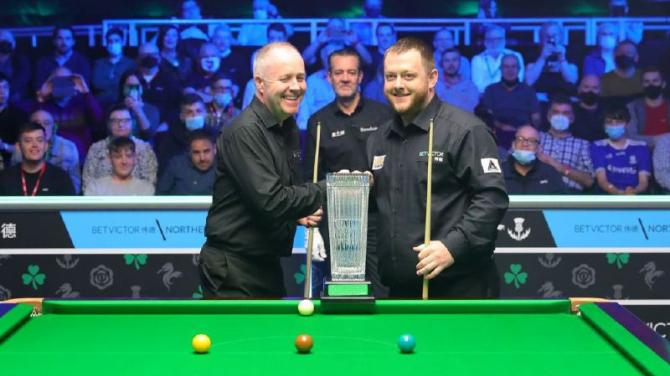 WHAT a year it has been for Antrim snooker champs Mark Allen and Jordan Brown - a fact underlined by their appearance in no fewer than three of Eurosport’s top 10 matches of 2021!

The first, however, is one that Mark would probably prefer to forget.

Coming in at number nine was his decidedly uncomfortable encounter with old flame Reanne Evans in the British Open.

They may have split 13-years-ago, but it has been reported that the pair are still embroiled in a dispute over child maintenance payments for their daughter.

This was a grudge match in the truest sense of the word, and the partisan crowd at Leicester were backing Evans.

Allen eventually scraped through 3-2, but afterwards he described the experience as ‘awful’.

But what a difference a few months make...

In October Mark took on John Higgins in the final of the Northern Ireland Open - and this time the crowd were very much on his side.

Having started out an unforgettable week in Belfast by making a 147 break against Si Jiahui in a 4-1 win, Allen finished it by lifting the trophy, his first success on home soil.

“I have tried to play it down all week but I know what this means to me, and I known what it means to the people here - so to win this trophy is a special moment that I will never forget,” he said.

The 9-8 nail-biter made it to number two in the list.

So who took the top spot?

Take a bow Jordan Brown! His match against snooker legend Ronnie O’Sullivan in the Welsh Open final back in February has been judged the best game of the year.

Occupying 81st spot in the world rankings and fighting for survival on the tour, Brown, a 750-1 outsider going by the nickname ‘The Antrim Ferrari’, became the lowest ranked winner of a ranking tournament since world number 93 Dave Harold’s 1993 Asia Open triumph with a 9-8 victory over Rocket Ronnie.

But having edged out Mark Selby 5-4 in the quarter-finals and Stephen Maguire 6-4 in the semi-finals in Milton Keynes, Brown played with a reassuring level of self-belief to carry off the £70,000 first prize after another 9-8 thriller.

“It was a David and Goliath contest. I was fully aware of the form Ronnie carried into that final,” said the local man after he gleefully tore up the form book.

”He only dropped two frames and was playing amazing snooker.

“He was playing like he was practising in the club, but I was like a kid on Christmas morning. It was a dream come true.”