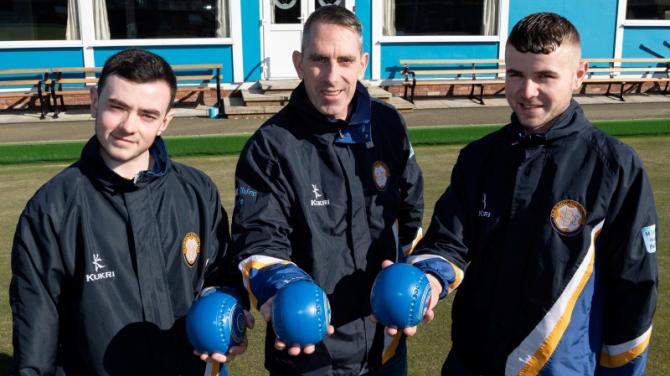 WITH the upcoming Commonwealth Games in Birmingham on the horizon at the end of July 2022, Lawn Bowls has been a great source of medal hauls for Northern Ireland since its introduction to the games with the Northern Ireland squads picking up 20 medals to date.

The 2022 Lawn Bowls squad was the first to be announced last week by the Northern Ireland Commonwealth Games Council.

And for Old Bleach Bowling Club in Randalstown the squad announcement has resulted in no fewer than three of its players being selected to represent Northern Ireland in the squad of five gents and five ladies – a truly momentous occasion for both the players and the club.

Among those selected was Martin McHugh, Whilst Marty may be a recent addition to the Old Bleach Club, having joined only in the past two years, previously playing at Whitehead Bowling Club, he is no stranger to the Commonwealth Games.

Indeed, this will be his seventh outing representing Northern Ireland.

Marty won the Gold medal in the Fours back in 1998 on his debut. Marty is currently the 2022 Northern Ireland Private Greens and Irish Bowling Association Pairs champion along with club mate Sam Barkley and has played at International level for over 20 years.

Sam Barkley, at the age of 22, will make his Commonwealth Games debut playing in the Pairs along with Marty McHugh.

He will also team up with club mates Adam McKeown and Marty McHugh along with Portrush player Ian McClure (another experienced player at Commonwealth Games), in the Fours.

Sam currently holds the title of British Isles Indoor Under 25 Singles Champion and in 2021 was the winner of the Northern Ireland Private Greens Under 25 and Irish Bowling Association Under 25 Singles championships.

Also, he holds the Pairs titles he won with Marty McHugh

Adam McKeown, who is also 22, will make his debut playing in the Triples alongside Ian McClure and Ballymoney (via Australia) bowler Gary Kelly.

He will join Sam, Marty and Ian in the Fours.

Adam has been a regular on both the Junior and Senior Irish International teams and has previously held the title of British Isles Under 18 Singles Champion.

Another Old Bleach member, Neil Booth, will also have an influential role at Birmingham 2022 as High Performance Coach with overall responsibility for the preparation and performance of both the men’s and ladies’ squads.