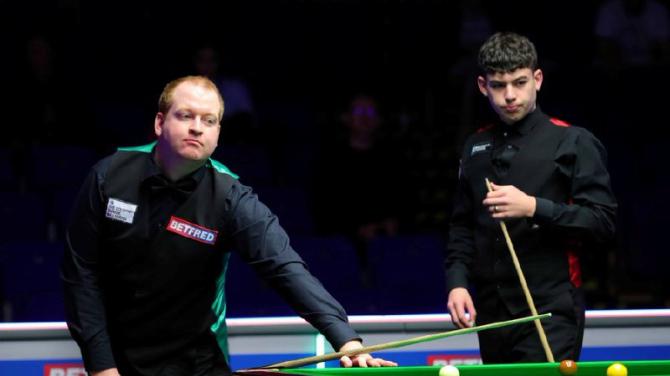 BIG hearted Antrim snooker ace Jordan Brown has told fans to ‘remember the name’ of Liam Davies after defeating the teenager in a match at the weekend.

Davies’ bid to become the youngest player to appear at a World Championship is over for at least another year, following his epic 6-5 loss to Jordan Brown in qualifying.

The 15-year-old became the youngest player to win a World Championship match when beating Fergal O’Brien - 35 years his senior - in the second round of qualifying.

That set up a match with Brown which went all the way and finished well beyond midnight.

Davies showed the composure and quality that got him over the line against O’Brien, but found himself 3-1 down at the interval.

The teenager showed table craft that belied his tender years to fight back from 5-3 down to force a deciding frame with runs of 52 and 72 - and keep alive his hopes of eclipsing Luca Brecel, who was 17 years and 45 days when appearing in Sheffield in 2012.

It was a tense affair in the finale, with no breaks of note, but Welsh Open champion from 2021, Brown, got the upper hand, but was full of praise for his young opponent.

“What a player for his age.

“He is under a good coach in Lee Walker.

“Just keep doing what he is doing.

“Early doors he was showing signs he was not wilting and is very hard to play against.

“He really impressed me tonight.

“It is the World Championship.

“It does all sorts to you, I was gone at one stage mainly down to Liam as he was putting me under so much pressure.

“He’s so impressive, and I am just relieved to get through.”

Brown will now face Michael White - who beat Mark King 6-1 - for a place at the Crucible.