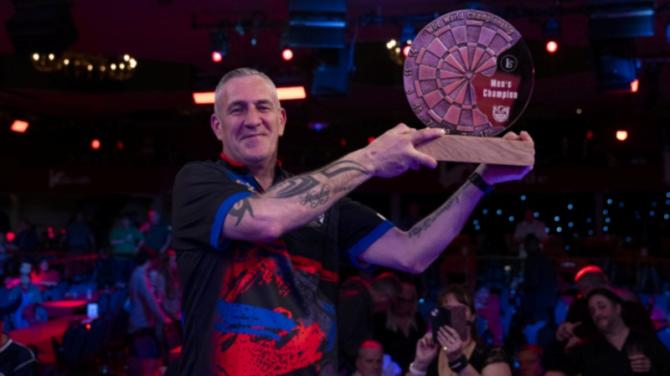 The Ballyclare man said that the win was the perfect 18th birthday present for daughter Hayley.

“That’s my birthday present to Hayley,” said ‘The Duffman’, with Hayley in the crowd cheering him on.

“Thanks to everybody for all their support. The crowd were brilliant.

“I came here hoping to win a match and now I’m the champion.”

The prestigious event is usually played in January but was put back because of winter Covid fears.

Duff led 5-4 before Tricole levelled again to take it into a final set.

Duff had beaten Richard Veenstra in the semi-finals, having earlier beaten Scotland's Jim McEwan in the quarters.

It was the inaugural WDF World Championship, having replaced the now-defunct British Darts Organisation's event.

Speaking to the Antrim Guardian late last year, English National Champion Duff said that the postponement of the World Championships at the Lakeside - which had been due to kick off on New Years’ Day - has been a ‘body blow’.

However the construction worker has acknowledged that with the competition put off until April, he would have plenty more time to work on his technique - and boy, did he!

Neil, known as ‘The Duffman’, finished 2021 year as the top ranked regional player for UK and Ireland.

He was the only Northern Ireland competitor to take part and recently signed a sponsorship deal with top darts brand Red Dragon.

Earlier in 2021, Neil lifted both the British Pentathlon title and England National Singles title, as well as reaching the Semi-Final stage in the Welsh Open and Danish Masters.

“It was a body blow to hear about the World Championships being put off, I was really looking forward to it,” he said.

“We all grew up watching it at Lakeside. I’d been getting up before work at 5.30am to get some practice in.

“A lot of the events have been put back so there will be lots of big competitions in the Netherlands, Romania and Scotland all happening close together in April and June.

“During lockdown, webcam darts really took off and I took a young player Josh Rock under my wing and he is going from strength to strength.”