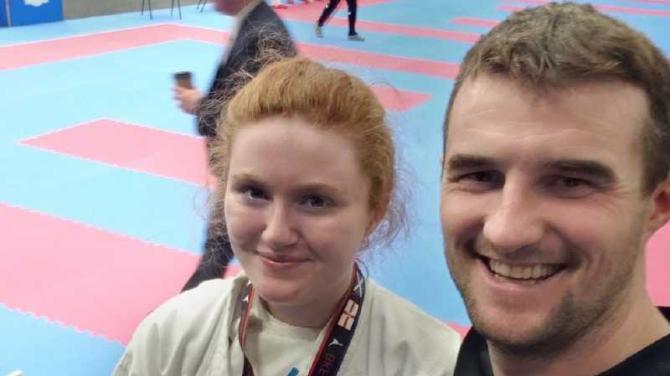 The tournament was the first major meeting of karate athletes from across the United Kingdom since the COVID-19 pandemic forced the country into lockdown in March 2020.

She was on top form as she fought her way through the preliminary rounds displaying the fighting spirit and winning techniques which have already earned her an enviable reputation on the Irish karate circuit.

Narrowly missing out on a place in the finals, an undeterred Katelynn pulled out all the stops to clinch a bronze medal in the semi-finals.

James was of a similar age to what Katelynn is now when he won his first British medal - also a bronze - and he went on to take numerous British championship titles during his adult career.

He also notched-up a host of international medals, and probably his most notable achievement was of beating a former World Karate Federation champion during a fight at Caesar’s Palace Las Vegas which earned him the USA Open title.

Now Katelynn looks set to emulate his success and is already preparing for the European Karate Federation cadet and junior championships which will take place in the Czech capital of Prague in June.

James is understandably proud of Katelynn's performance in the British championships.

“She trained hard all through the pandemic and is now reaping the rewards of her hard work,” he told the Guardian.

“Katelynn has laid the foundations to embark on a very successful international karate career.”

High praise indeed, from someone who knows what it takes to succeed in the sport!

Anyone wishing to learn karate with James Brunton can contact him on 07513837557.