Bangers and crash at Raceway! 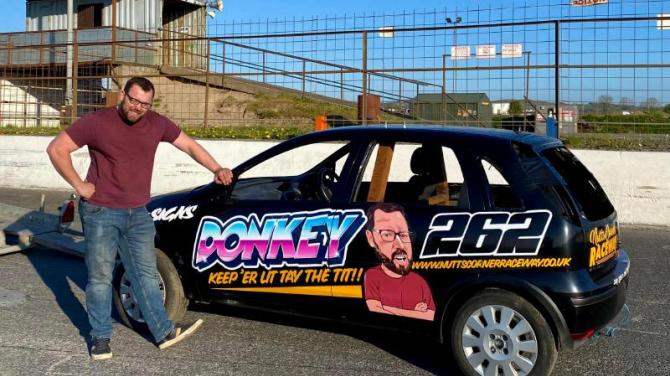 THIS Sunday (May 1) a Caravan Destruction Derby will headline proceedings in what promises to be an afternoon of carnage at Nutt’s Corner Raceway.

Adding to the fun, local social media sensation DONKEY 262 will make a guest appearance, competing in the B2B Micro Bangers as they contest their Irish Masters Championship.

Donkey 262 has become something of a local hero since he started sharing comical videos on social media platforms.

The sometimes outrageous videos, all too often poking fun at others, are sure to make him a massive target on track!

Donkey attended the Raceway last weekend to familiarise himself with the surroundings - and while he was there he managed to get a few laps behind the wheel of Ryan Wright’s 2L Saloon Stock Car.

Donkey will have found the test session helpful, however the stakes are sure to rise on Sunday when he finds himself on track with a few dozen fellow adrenalin junkies!

Sunday’s (April 24) race meeting at Nutt’s Corner served up another fine mixture of thrills and spills.

Jonny Stirling got his afternoon of to a fine start in the Brisca F2 Stock Cars with a convincing victory in heat one.

Aidan McFerran was the heat two winner before Stirling returned to pace in the meeting final, where he grabbed the silverware. Stirling was followed home by Gavin Fegan in second and Thomas Greer third.

The 2L Saloon Stock Cars treated the fans to a action packed afternoon of race action, with plenty of bumper work in all three events. Dylan Booth and Anthony McIvor were the heat winners before Matthew Stirling stormed to victory in the meeting final where Glenn Watt was the runner up.

Jason Darragh showed promising form in the Stock Rods where he recorded wins in both the heats. Come the final it was Andrew McLeister who come out on top, next across the finish line was Sam McKinstry and William Donnell.

The novice Andrew Cole is proving unstoppable in the Group 2 Lightning Rods where he produced another brace of victories, completing the meeting undefeated. Cole’s closest pursuers were George Esler and Freddie Fleck who finished second and third respectively in the final.

In the Junior Rods it was the star name of Jack Morrow who claimed victory in the opening heat before Brodie Millar took the heat two honours. Recent newcomer Alex Walker recorded his maiden victory in the grand final, completing the distance ahead of Daniel Stewart and Morrow.

Completing the busy race schedule was the youngsters in the Micro F2s. A large field of competitors battled it out for supremacy. Harry Martin displayed his form with a perfect hat trick of wins.