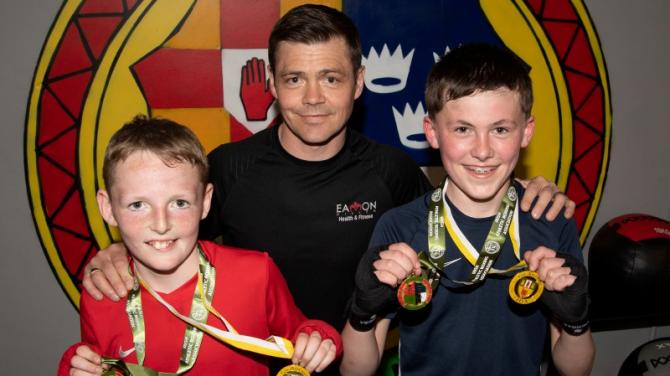 ANTRIM can now boast not just one, but two new Irish Champions!

It’s been a whirlwind 12 weeks for these two boys - winning four championships each before picking up that Irish title.

However a lot of the hard work was put in months before that first bell.

Jude McLoughlin and Callum McMillan, both students at Antrim Grammar and members of the Antrim Boxing Club have been boxing since the age of eight and 10 respectively.

Now both 12-years-old they entered their first competition - the County Antrim Threes - in February this year. And both came away with gold medals after Jude got a w/o and Callum won three tough fights in three days to pick up their first titles.

But there was no time to rest as the Armagh/Down championships followed the very next day.

There was no time to celebrate as just a week later the boys weighed in for Antrim Sixes championships. The draw was made and it was the same outcome. Jude was given a bye to the final and Callum would have to box his way through the quarterfinals stages.

Neither disappointed as Callum once again won all three fights, this time stopping two of his opponents inside the distance to collect his third title. Jude also stepped up his game and stopped his opponent in the final to do the same.

Three gold medals each and the confidence was starting to grow in the boys. Next up was the County Antrim Open championships - and they needed to win these to qualify for the National championships. However the boys didn’t let the pressure get to them and both came away with the wins and the gold medals that secured their place in Dublin.

It was a great achievement and although there was a few nerves and it was a big ask, the boys where confident they could now compete and beat anyone.

And so they did - winning their quarter and semi finals to book their place in the final that Friday night.

The atmosphere and buzz about the stadium on finals night made for a fantastic occasion. Callum was given the honour of carrying the Ulster flag to the ring during the opening ceremony.

Both stuck to the game plan and boxed out of their skin, showing great skill, grit and determination to come through and deservingly win that gold medal and be crowned Irish Champion.