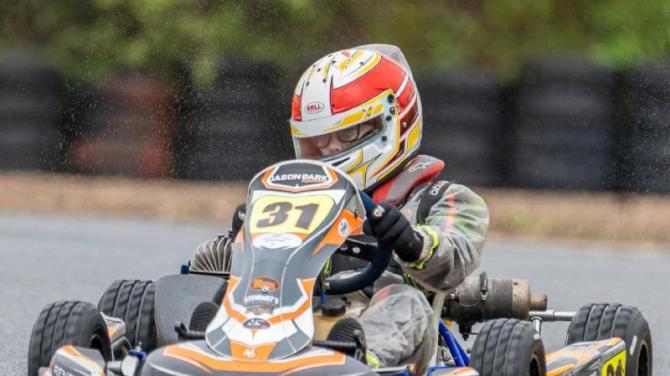 AN Antrim Primary School pupil is sitting at the top level of the Irish Cadet Karting scene.

Jason Park, who hopes to attend Antrim Grammar next term, has been competing in the first two-round series, the first in Scotland at the start of April and the second round at Nutts Corner last weekend when he had a clean sweep winning all four races and scoring maximum points to win the 2022 Keltic Cup in the IAME Cadet class.

He also won the second round of the TKC championship in Whiteriver Park Co Louth at Easter.

His next races this weekend in the latest round of the Ulster Championships and in Motorsport Ireland competitions on both sides of the border.

Jason has been karting since he was six, and in 2018 met his Grand Prix heroes at Silverstone after being named a ‘Grid Kid’ - one of ten Future F1 Stars.

The Motor Sports Association asked for young hopeful to apply, and more than 50 from across the UK sought to claim their place.

Coulthard said it was a tough decision, but the winners - who will accompany their GP heroes to the grid on race day - had an edge.

“I couldn’t believe how many trophies some of these youngsters had. I didn’t win so many in 30 years of racing!” he said.

Now 11, Jason, from Tannaghmore, is supported by proud parents Steven and Donna and his two younger sisters.

The family is kept very busy ferrying Jason all over Ireland and Scotland.

“He is very dedicated to his training and competing, but when he is away for the weekend, he very often has his nose in a book and loves reading,” explained Steven.

“He loves school and his classmates are very supportive.

“It’s hard work, there’s a lot of travel and the vehicles take a lot of money and maintenance but Jason works hard and puts in so much time and effort.

“It’s a real family hobby, I used to compete myself and we all love to go along and cheer him on.

“His main sponsor is Steward Commercials in Antrim and we have lots of good sponsors from Antrim, Newtownabbey and Ballymena and we thank them for all their support.

“He’s been at it since he was six years old so he’s a bit of an old hand!

“But he is continuing to do really well and it is great to see how much he enjoys it.”