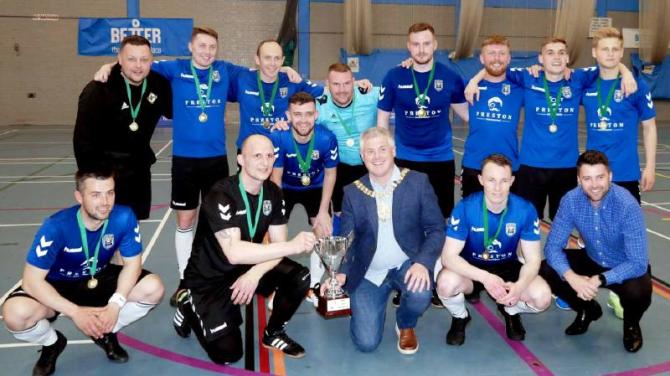 ANTRIM Futsal Club, formed only in late 2021, are the Northern Ireland Football Federation Champions, after beating Belfast Celtic 5-3 after extra time in Sunday’s final at the Shankill Leisure Centre.

In the first full season of the Northern Ireland Futsal Federation, the final was contested by two championship clubs, Antrim Futsal and Belfast Celtic, after resounding victories over more experienced Premier League opponents in the semi finals.

Antrim, the NIFF’s newest club, pulled off the shock result of the season by convincingly beating newly crowned premier league champions Belfast United 5-3. In the other semi final Belfast Celtic won out in a powerful performance against the strongly fancied Omagh Futsal Club.

In Sunday’s final, Jamie Willighan gave Antrim a one-goal lead which was duly cancelled out by Celtic.

The second half, however, belonged to the Belfast side, and two Celtic goals took the final into extra time, where Antrim regained the initiative through another ex Comrade, JB Dobbin

A fifth goal from Samuel McIlveen, ex Ballyclare and Larne and it was time for the celebrations to start.

As an Antrim Futsal spokesperson said: “We are the ‘newest’ futsal club within the Premiership and Championship as we only formed in late 2021 with it being totally new experience for most of us.

“We now have a settled team and we know ourselves how good we can be, getting better with every futsal game we play and learning the game as we go.

“Our first season in futsal has been successful and to be playing in the final of this cup is a cherry on the cake. It gives a great foundation for next season.”