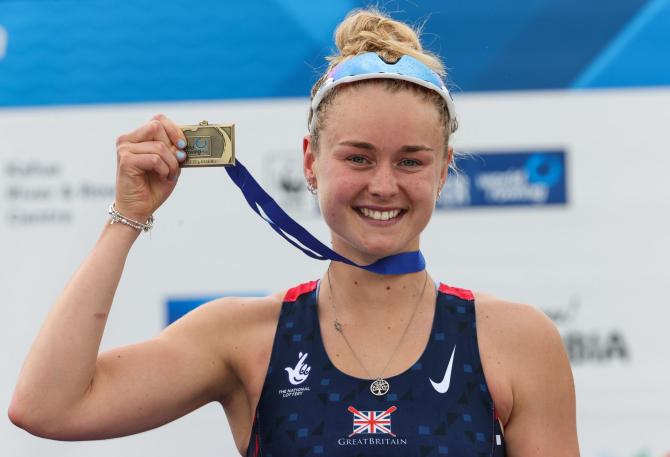 IT HAS been a week to remember for Bann Rowing Club with success on both the national and international stage.
Pride of place goes to Ellie Kate Hutchinson who claimed gold in the National Schools Regatta at Eton Dorney in England.
Ellie Kate, accompanied by coach Geoff Bones, travelled to the London 2012 Olympic Games venue to compete in the Girls Championship Single Sculls at the National Schools Regatta.
“In a field of 45 competitors, Ellie Kate came out on top in the time trial before the top 16 scullers from the time trials qualified for the semi-finals,” explained a Bann spokesperson.
“In her semi-final, Ellie Kate rowed a controlled race to finish comfortably in first position.
“Then, in the eight boat final, Ellie Kate found herself in fifth position at the 1,000 metre mark but her sgtrength and fitness saw her move steadily through the field so that with 500 metres to go she was in third place.
“The top three continued to battle it out and in the most exciting race of the day Ellie Kate powered through to win, beating the fancied Great Britain sculler McKnight in the process.
“This was a major victory for Ellie Kate, especially as many past winners of this prestigious event have gone on to represent Great Britain at Under-23 and senior level,” the spokesperson added.
Indeed, one such previous winner – Bann's Hannah Scott – was making her mark in the senior single sculls at the Rowing World Cup in Serbia.
Hannah finished on the podium in the bronze medal position, a tremendous achievement on her single sculling debut for Great Britain.
“Bann Rowing Club captain Keith Leighton is delighted with Ellie Kate and Hannah's success and says he hopes their efforts help inspire more young rowers to follow in their footsteps,” said the club spokesperson.
Meanwhile, in Florida, the 2019 Irish champions from Bann RC – Muryn Greene, Rebecca Logan and Alex Hutchinson – helped Oregon State University to a 14th place finish overall at the NCAA Rowing Championships.