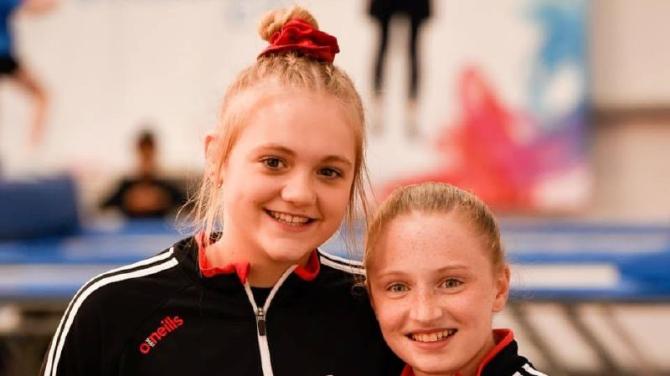 They were joined on the trip by Abbie Thompson and Katie Freel, all members of Flight Gymnastics Academy in Newtownabbey.

Randalstown girl Ellie and Fionnuala, who lives in Crumlin, are both British Champions having won gold in their respective DMT (double mini trampoline) categories at the British Open.

Ellie and Fionnuala were also crowned British champions in 2019 and both girls qualified for the World Age Group Championships in Tokyo in December where both of them impressed with Fionnuala finishing fourth and Ellie seventh.

Due to the COVID pandemic, they both missed out on the European Championships but having earned elite status, they have continued to work hard and train five days a week at Flight as well as training sessions with the British team over half a dozen weekends at Lillieshall in England.

For many people training so hard and having to keep up with their schoolwork would be overwhelming but according to the girls’ extremely proud mothers Alyson Reid and Rosemary Mulholland, the girls take it all in their strides.

“Ellie just take each day at a time,” said Alyson.

“She doesn’t feel pressure whatsoever even though she’s British champion and doesn’t get nervous at all - she’s just excited to be going and is really looking forward to it.”

It’s a similar story for Rosemary who says that Fionnuala ‘just loves the sport’.

Becoming such a high flier, she said, so ‘is just an added bonus’.

“What she has achieved is absolutely fantastic and given the last 18 months it’s been phenomenal that they have been able to keep up the standard that they achieved.

“Getting elite status meant so much because it meant they could keep training but with the pandemic and everything that entailed, it was a social outlet and was great for emotional and mental stability.”