Conor brings first ever bareknuckle title back to Antrim 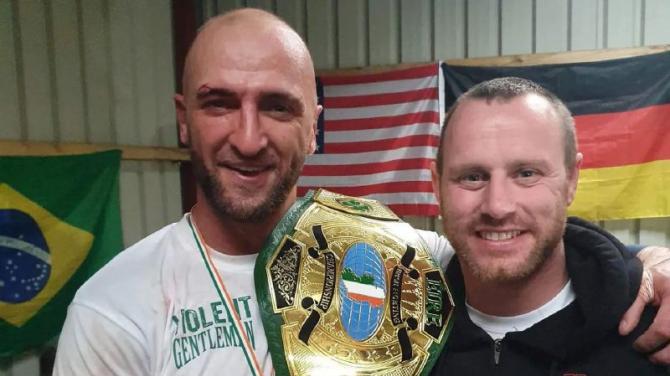 A BOXER from Antrim has brought home a title from Ireland’s first ever official bareknuckle championship at the weekend.

Cruiserweight Conor ‘Da Crook’ Cooke, has been fighting in various disciplines for around 15 years and set his sights on the emerging sport.

Bareknuckle is huge around the UK and America and Conor is hoping popularity will spread to Ireland north and south.

The Antrim fighter confirmed he had ‘decided to jump into bare knuckle game’ and debuted at a rescheduled event on Friday July 1 at a behind-closed-doors location in Northern Ireland.

Having picked up British and world amateur and pro championship titles in kickboxing, boxing and MMA to his resume, he can now say that he is the first ever 85kg Irish Bareknuckle Boxing champion in history.

“I got tested and challenged.

“Which makes victory even more rewarding.

“Got the win after a tough tough fight.

“I’m pretty sore today. A couple of stitches in the head. But what an experience.”

Mr Cooke has thanked his mentor Martin Begley of Heat MMA and all his promoters, sponsors and supporters.

“Thanks for all the mails and texts folks.” he said.

“Thanks to my sponsors the promoters and team.

“Thanks to Martin Begley and to anyone who helped out at the gym with me.

“Thanks to my Mum and Dad and to everyone who showed support.

“I honestly appreciate it all.

“I’m a bit sore as expected, but still buzzing.

“I cannot wait to go again.

“If any promoters or management teams want to get in touch about what’s next then please feel free to do so.”