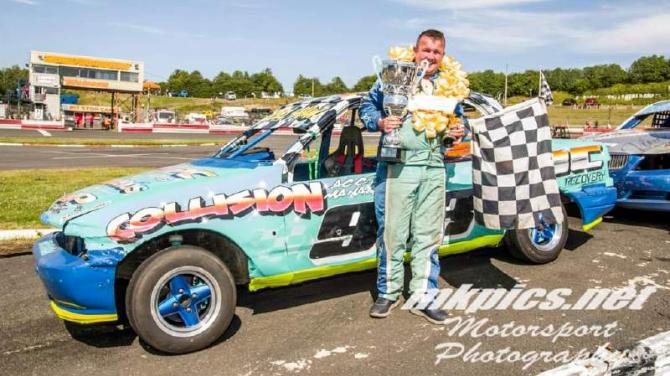 AN Antrim man is celebrating after being crowned Lightning Rods Champion of the World at Hednesford Hills Raceway.

Ricky Shaw (48) is originally from the racing epicentre of Nutts Corner but now lives in the Steeple.

He is managed by DMC Race Promotions and also manages to juggle his racing hobby with the managerial role at Antrim Rovers.

He lifted the title from team-mate Nigel Jackson and shares a garage with Conor Hughs and son Leyton, who also hold world and championship titles in their classes.

Ricky drives a Ford Sierra Sapphire and started racing in 1992 with his cousin at Nutts Corner.

“I’ve been racing in this class on and off since about 2005 and I’ve always enjoyed bigger cars, bigger tracks and rear wheel drive, which are a bigger challenge to set up and work with.”

Last year Ricky won his first major when he was crowned British Champion, a title which he will defend at Tullyroan in just over a weeks’ time.

His upgrade to World Champion will mean his black and white chequered roof will now be re-sprayed in gold.

“The stock car season runs from around Easter to October and we race every fortnight,” he explained.

“You put in more than you get out in terms of money, fuel, boats and other expenses and there is a lot of time spent in the garage, but it is well worth it.

“A lot of friends over the years have become loyal sponsors and we all try to help each other out.

“There is great camaraderie and my wife Joanne is really great support and can even put the petrol in!

“Three years ago I had a mild heart attack and had stents put in and I have come back from that.

“I have been involved with Antrim Rovers for many years and managed the senior men’s team. I had to go away from it for a while because of my health but I am back now and really enjoying it.”