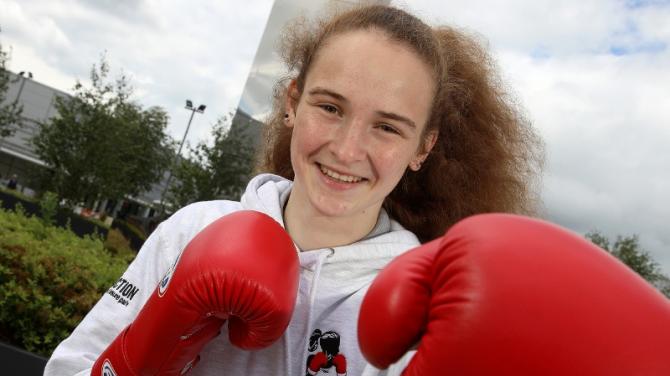 A YOUNG boxer from Antrim has her eyes on the prize as she prepares to represent Northern Ireland at the Commonwealth Games in Birmingham in just over a week.

Talking to the Antrim Guardian after a training session, former Parkhall Integrated College student Nicole Clyde (19) says that she is proud to inspire other young people to get into the sport.

“The opening ceremony is coming soon, it is getting close and starting to feel real,” she said.

Nicole is currently living in dorms at the University of Ulster’s Jordanstown Campus with her Northern Ireland teammates and says they are becoming ‘a wee family’.

A ‘sparring camp’ has been held at the campus in recent weeks with competitors from the New Zealand, India, Canada and Barbados teams, among others, visiting and training in Northern Ireland.

“It has been really great to mix with people from different countries and even to see the way they train and learn from them.

“Even something like warm-ups can be completely different depending on where you are from.”

Nicole said that her family, friends and coach are making sure that everything is as normal as possible for her.

“Mum is coming up every two or three days to keep everything the same and make sure everything is okay.

“We go over to Birmingham on Sunday the 24th and the opening ceremony is on the 28th.

“The goal is to go over there and win, bring home a medal for Antrim.

“My coach Eamon Gillen is also in contact every day so it is like he is still here coaching and giving me pep talks.”

Nicole said that lots of young people have been coming to Antrim Boxing Club to learn more about the sport after learning of her successes.

The current Under 22 Irish Boxing Champion had her first fight at 12-years-old, and has represented Ireland at the European Amateur Boxing Championships achieving top five in Europe in her weight category at the age of 16.

“There have definitely been a lot of kids coming in, saying things like ‘we heard about Nicole Clyde’ and there is a new girl now participating, which is brilliant. The more people get involved in boxing the better and I love to see girls and women showing an interest. The sport is for everyone.”

Nicole says that a combination of great facilities and support from a young age means that Antrim is becoming a well-known town for sporting talent.

“We have places like Antrim Forum and Allen Park and all the various clubs and gyms, so many good coaches in lots of disciplines, and at school we were always encouraged to do sports, as well as fitness it’s been proven that keeping active encourages mental health.”

Nicole has also thanked her main sponsors, The Junction Leisure and Retail Park, for their support.

“To have such a big company throw their weight behind me is amazing and I am really grateful!” she added.

Nicole has revealed that she has applied for a course at Belfast Met starting in September, but says she is determined to make a career out of sport.

“I will see how I feel after the Commonwealth Games but at the moment, I am very happy doing what I am doing and hope I can continue.” she said.