Ashleigh bowls over the competition to bring gold medal back to Antrim - and is now off to the Commonwealth Games! 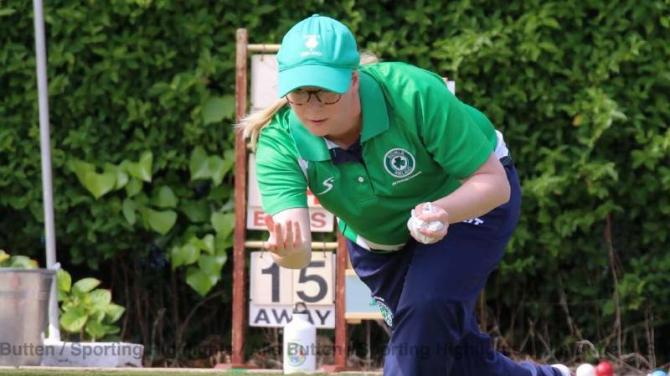 AT the age of 21, Ashleigh Rainey decided to accompany her granny to short mat bowling practice at All Saints’ Church Hall.

“They just said, you can’t sit down, you have to give it a go, and that was me hooked!” she laughed.

Fast forward a few years Ashleigh, after switching to lawn bowls, helped Ireland scoop a gold medal at the European Championships in the Ladies Triples with her teammates Lara Reaney and Chloe Wilson, who defeated a strong English trio.

And now she is off to Leamington Spa to take part in the Commonwealth Games.

The mum of two, a civil servant, is from Antrim town but now lives at Nutts Corner, while her parents live in Randalstown, where she often practices at the Old Bleach rink.

She first became a member of Antrim Lawn Bowls Club before moving to Ewarts in Belfast.

“I just went down with my granny to see what was happening and decided to have a go. I never thought I would end up travelling to Australia, Hong Kong and Malaysia, winning gold medals and competing at the Commonwealth Games!”

Ashleigh is keen to dispel the myth that short mat or lawn bowls is for ‘old people’.

“I started at 21 and when I started in the elite category I was one of the youngest and now I am the oldest in my team at 37, by some margin,” she said.

“Chloe is only just 20 and Lara is still a teenager.

“It is a very social sport and the age ranges can be massive, you could be playing a nine year old in one game and a 90 year old in the next, and both will give you a great game!

“At one time my granny, my Mum and I were all playing, three generations, it was a lovely thing to be able to enjoy with my family.”

Ashleigh said that the sport involves a lot of concentration and hand-eye co-ordination.

“Our games are about two hours fifteen minutes, and there is a lot of preparation and training, things that improve our concentration and awareness and prevent tiredness, we have been working with a nutritionist.

“We are marked on everything! It can be a very technical sport.”

Ashleigh’s role is to throw the jack and decide positions.

She said that her employers and colleagues have been very supportive.

“I am on maternity leave at the moment and will go back after the Commonwealth Games, my youngest is seven months old,” she said.

“My employers have been brilliant and it is great to get cheered on by my workmates.”

Like many of Antrim’s sporting stars, she is a former pupil of Parkhall Integrated College and credits the school with her love of sport and competition.

“In my class alone was Olympic hockey player Mark Gleghorne and Zoe Brown, who also competed at the Commonwealth Games in pole-vaulting.

“Parkhall had a big PE teacher and our teacher Mrs Burns was very inspiring, we all played for Randalstown Hockey because of her!”

Ashleigh said that she now wants to inspire others of all ages to get involved in bowls, especially women.

“All five girls on the Irish team are debutantes, in the younger age range, but this is a sport for everyone.

“Clubs will provide the equipment initially to anyone who wants a go and there really are no barriers in terms of age or previous experience.

“It is really accessible, great fun and there are clubs all over the borough - and you too may end up travelling the world!”

The lawn bowls squad was the first to be announced by Team NI for the Games this summer.

Alison Moffitt-Robinson, head of mission for Team NI, said lawn bowls was one of the most successful Commonwealth Games sports for the overall squad, with an impressive 20 medals won to date.

She added: “It is going to be exciting to watch the women’s team, with a mix of youth and experience, in action in Birmingham in a sport that has world-class players across the Commonwealth.

“This will be the first Commonwealth Games where the number of medals for women’s events outnumber those for men, so the focus on women’s sport will be significant.

“I hope, because of the enhanced promotion and some top-class performances by our competitors, that young women and girls will be encouraged to get involved in sports such as lawn bowls.

“The team have been working hard under the direction of Team NI sport performance lead Neil Booth and will be doing all they can in preparation to make the most of a home Games environment.

“I hope they have a fabulous experience of the Commonwealth Games and that they succeed in adding to the medal tally for Team NI.”