Randalstown rider does the double at Donington 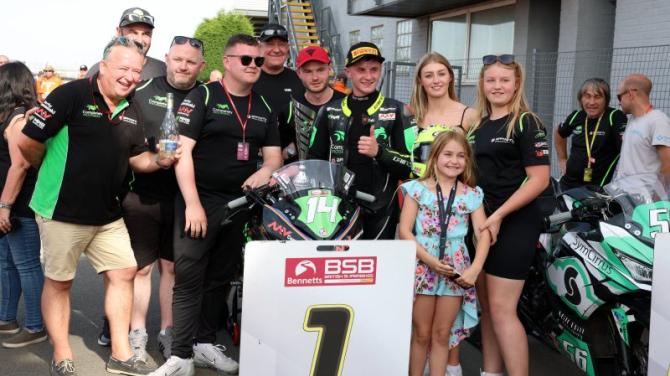 TWO superb race victories for Completely Motorbikes/Affinity Sports Academy rider James McManus on the Donington Park GP circuit at the weekend took his points total to 118 for the season and extend his lead in the Championship to 17 points.

Already leading the series coming into the weekend this double makes it three wins in a row for the Randalstown teenager, after victory in race two on the Donington National Circuit, last time out.

With a heatwave in full swing over the United Kingdom James McManus and the rest of the British Junior Supersport riders made their way to Donington Park once again. This time they would ride the GP circuit as part of the World Superbike weekend. The incredible weather brought huge crowds to the Leicestershire circuit with more than 50,000 tickets sold before the weekend began.

The Randalstown youngster got off to a great start as he topped the free practice session on Friday with a time of 1:46.901. The times were close as ever with less than three-quarters of a second separating the top nine.

There was only the 25-minute qualifying session for the Junior Supersport riders for them to look forward to on Saturday.

Thirty-six riders went out in perfect conditions as they all looked to set the fastest lap. McManus put in a solid 5 laps before coming into the pits for some final adjustments.

He had been running in the top 3 before his return to track with around eight and half minutes. He quickly lit up in red on the timing sheets on the first three sectors before setting what was the second fastest time.

With the clock ticking he slipped to third. He managed to cross the start line with 10 seconds remaining. A superb final lap saw him register a 1:45.424 which put him in the middle of the front row for race one.

The British Junior Supersport races are often thrilling to watch as usually a group of riders manage to entertain the crowd with lap after lap of close racing and exciting overtaking. The first race on Sunday was no exception.

Making a good start for the grid McManus made sure he remained in the leading group from the beginning. Changing places often with Keiran kent and Charlie Atkins and Keiran Smith, he managed to make sure he was first over the start-finish line in 8 of the ten laps including the all-important final lap.

Setting his fastest lap of the race on the final lap McManus ensured his second win of the season by 0.515 seconds over Charlie Atkins and Keiran Kent in third.

The victory for number 14 took his season’s tally to 93 points from 5 races.

The second British Junior Supersport race was the final race of the Donington weekend.

Despite his victory, McManus started fifth for the second race with the grid based on the fastest lap times for race one.

James McManus made a superb start to the race as he picked off one rider almost immediately. By the third sector, he was into 3 rd before going on to take second position by the end of lap one.

It was on the fourth lap that McManus first cross the start-finish line at the head of the race having started fifth. Riders switched positions often as the number 14 battled to try and stay at the front.

In the closing stages, McManus succeeded in making a gap of just over a second as he began to consolidate the race lead. Leading onto the final lap, he just had to hold steady for the final 2.5 miles. He did so with confidence and secured his second victory of the weekend and third in a row to increase the championship lead. James McManus said “The bike has worked perfectly the whole three days, so a big thank you to Completely Motorbikes / Affinity Sports Academy. To come away with two wins is a perfect result so I am delighted. I would like to thank all my friends and family and supporters and also all my sponsors who make this possible.”

There is now a break of around a month before the British Junior Supersport category returns to the track at Thruxton from the August 12-14.