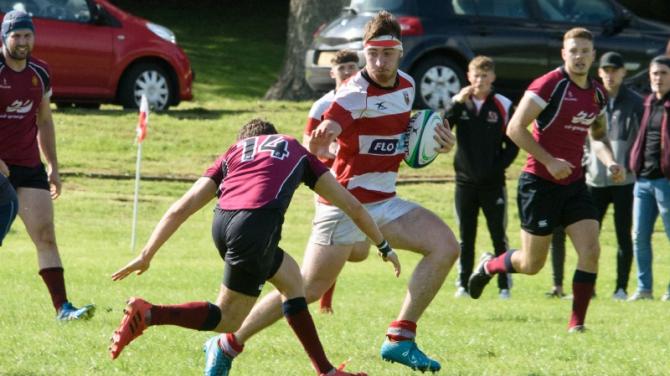 Over the last two seasons Randalstown have been unable to defeat their opponents in the league despite some very close calls so they were hoping to be on the right end of the scoreline this time.

The game started with the visitors on the attack and a good back movement saw Academy score a converted try after seven minutes.

Randalstown soon replied with a penalty from out-half Martin Connolly to make the score 3-7 after 20 minutes.

The Randalstown backs began to show their attacking skills and a great break by centre Matty Mawhinney and a pass to Coby Mason saw the winger go under the posts for a try which Connolly converted to make the score 10-7 to the home team.

However Academy hit back with two penalties to make the half-time score 10-13 in their favour.

In the second half Connolly added two more penalties to put the hosts ahead. however Academy nudged ahead with a further try to leave the scoreline 18-16.

Randalstown hit back to take a narrow 19-18 lead midway through the second half with another Connolly penalty.

The game seemed won when Dean McCrory the young Randalstown second row charged over for a try to be followed soon by a Jack Dempster score after good work from new scrum half Tommy Holland leaving the score 31-18 in Randalstown’s favour.

However, a late penalty and unconverted try from Academy made the score 31-26 and made for a nervy finish.

But 'Town held out for an impressive opening day win.

Only excellent defence by both forwards and backs kept the much bigger Academy side out.

Coach Gary Longwell was pleased with not only the result but the effort of all the players.

However, he expects a tough home game this weekend against newly promoted Lurgan.

The County Armagh side were also Gordon West Cup champions and travelled to Fermanagh at the weekend and lost narrowly 17-6 to a Clogher Valley side who have just come down from Qualifying League 1.

This is clearly a Lurgan side who are still brimming with confidence and they will bring a different but just as challenging task to Neillsbrook.

*Randalstown Second XV had an excellent friendly run out against Portadown, coming away 47-12 winners with tries from Danny McGrandles Matthew Turner Bryan Gourley, Peter McWhirter and a brace from Dan Odita.

They have another friendly this Saturday against Rainey before their league season kicks off the following weekend.

There will be a barbecue at the club after the game to mark summer coming to a close.