Randalstown pipped in Junior Cup at the end of titanic battle 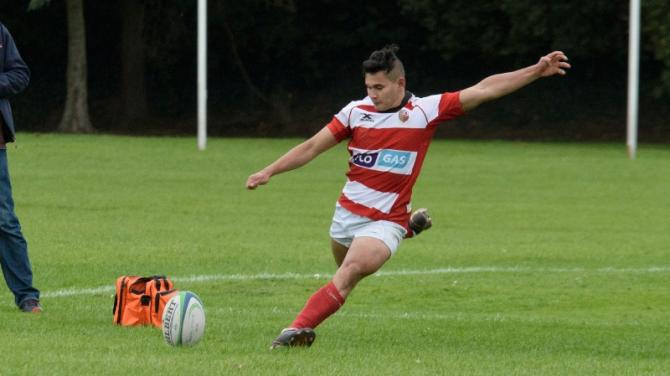 RANDALSTOWN entertained Qualifying League 1 leaders Grosvenor in the second round of the Junior Cup at Neillsbrook on Saturday, but unfortunately after a hugely entertaining and high scoring 80 minutes it was the visitors who were successful.

The large crowd was entertained by an exciting game of open rugby in which Randalstown opened the scoring with a well-taken try in the 10th minute when young inside centre Ryan O’Dea crashed over in the corner after a sweeping move from one side of the pitch to the other.

Randalstown increased their lead a few minutes later when out-half Martin Connolly struck a well-taken penalty to make it 8-0 to the home side.

However, the remainder of the first half belonged to Grosvenor who took control of the game and by half time had established an 8-21 advantage after scoring three converted well-taken tries.

The second half began with Randalstown re-establishing their supremacy as young second row Dean McCrory forced his way over for a close-range try that when converted by Connolly brought the home side back into the game at 15-21.

Connolly added another penalty before McCrory’s second row partner Dee Millar then got in on the try-scoring act when he too crossed from a couple of metres following a fine breakaway from their own half.

When Connolly added his third penalty, Randalstown had established a 28-21 advantage but such was the to and fro nature of the game Grosvenor soon grabbed their fourth try that when converted tied the game at 28-28 with only a few minutes remaining.

Both sides went for the win as full-time and then extra-time loomed but it was the Belfast side who got the vital points when a Randalstown infringement was penalised by the winning kick.

With two players simultaneously yellow-carded at a late stage of the match Randalstown were unable to score again to leave the visitors winners and advancing to the next round.