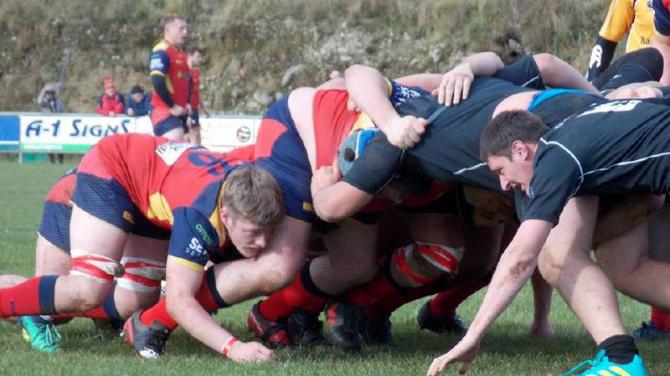 BALLYCLARE made the 520-mile round trip to the most westerly rugby club in Ireland, Connemara RFC, for their first round All Ireland Junior Cup game.

The team were able to get the journey out of the way and rest for the match, whilst the supporters got a chance to enjoy the Galway nightlife.

An amazingly picturesque journey past the Twelve Bens on the journey to Clifden on Saturday was a highlight of the trip.

The Connemara pitch sits right by the sea in Galway and was in good condition for the game.

Weather at the start of the game was bright with a strong gusting wind, blowing across the pitch.

Just after half-time there was a very heavy shower of hail, before returning to bright sunshine by full-time. The wind also dropped in intensity following the hail storm.

Ballyclare started the match intensely, looking like a side who were ‘up for it’. The visitors kicked off with the slightly diagonally blowing wind in their favour for the first period.

Early pressure in the Connemara half presented Robbie Reid with a kick at goal, when Connemara were penalised at a ruck, right of the posts around the 22.

From the restart a great catch and running return by Callum Wilson brought play deep into the Connemara half.

At the breakdown a scrum was awarded. Ballyclare showed great power driving Connemara backwards, with the home side penalised for popping up.

Reid made no mistake with his second attempt in quick succession to put Ballyclare 3-0 up.

Ballyclare continued to dominate at set pieces all game, with their lineout also functioning well in difficult conditions. Hooker, Matthew Coulters ‘darts’ were great all day.

From another forward moving scrum, midfield, Ballyclare won the ball and attacked.

Willie Stewart burst into the 22 as Ballyclare swarmed into the Connemara territory.

The ball was recycled quickly by scrum half Eastop as Connemara’s heavier pack had been counter-rucking well. He found Robbie Reid who bent to catch the low pass and drive over for the opening score on 15 minutes.

Connemara played a kick and chase type of game and tried to capitalise on any Ballyclare defensive errors.

These were few and the committed Ballyclare defence held strong.

Play leading up to Ballyclare’s second try started with a huge Gary Clotworthy penalty kick, from hand, with the wind, from one side of the pitch to the other.

At the breakdown the ball was whisked away quickly by scrum-half Andy Eastop through the hands of Clotworthy, who fed left wing Michael Kirk who dotted down in the left hand corner.

A superb conversion by Reid added the extra two points for a 15-0 Ballyclare lead.

Ballyclare were thwarted from scoring again, next play. Powerful running by Robbie Reid broke the Connemara defence again, getting a pass away to Joel McBride whose run brought play towards the Connemara try line again.

McBride passed left to Kirk, who was stopped just short. Ballyclare were penalised at the breakdown allowing the home side to kick the danger away.

Connemara got a try back on the stroke of half-time. From a scrum close to the Ballyclare line, Connemara recycled possession.

The home side tried a couple of pick and go’s trying to break the line.

When this wasn’t working, they attacked a narrow blindside on the right and found room to score in the corner. The missed conversion attempt was the last play of the first period to leave the scoreline at the interval 5-15 in the visitors’ favour.

The darkening sky emptied its contents at the start of the second half started, with heavy hail falling for the next 10 minutes and the wind strength picking up.

When the precipitation stopped the sun came out again and the wind subsided.

Connemara scored another try midway through the second half when a long kick down field saw Michael Kirk get caught flat-footed, slipping as he tried to field the kick.

The ball bounced directly into the arms of the Connemara kick chaser who ran in to score, right of the posts.

The conversion attempt was missed but left just five points separating the sides.

Ballyclare showed great game management when Connemara were penalised at the scrum yet again.

On the edge of the 22, in front of posts, Reid kicked the penalty to put Ballyclare more than a converted score in front, at 18-10.

As the clock ticked down, Connemara tried to play everything quickly trying to catch Ballyclare off guard, penalties were tapped and ran in search of another score.

However, the Ballyclare defence held firm.

With the game heading into the final 10 minutes, Ballyclare utilised their bench, being able to rest tired legs by adding the experienced Willie Logan and Niall Lawther to the mix.

Logan proved very effective at carrying the ball against a tiring Connemara.

In the final five minutes, Ballyclare exerted pressure in the home 22 again.

When the home side were penalised at a breakdown, Reid again converted the penalty to see Ballyclare increase their advantage to 21-10, which proved to be the final score.

A great cup win on the road, the packs’ dominance in the scrum with the hard working front row of Rory Henderson, Matthew Coulter and Al Boyd as well as replacement Jack Black, set up a lot of attacking options for the visitors.

Lineouts worked well and when the backline got room to run they looked a threat every time.

Anticipation mounts for the draw with the hope of a first home game following four successive away fixtures over the three years Ballyclare have been in the competition.

Ballyclare return to League action at The Cloughan this Saturday when local rivals Carrickfergus are the visitors, with the second round All Ireland Junior Cup fixture due to be played on November 10.

*Ballyclare's only other team in action at the weekend, after Malone were unable to field a team against the Fourth XV, were the Fifths who travelled to the north coast to play Coleraine’s undefeated Third XV and went down 46-12 to a well-drilled side.