Town too strong for Omagh 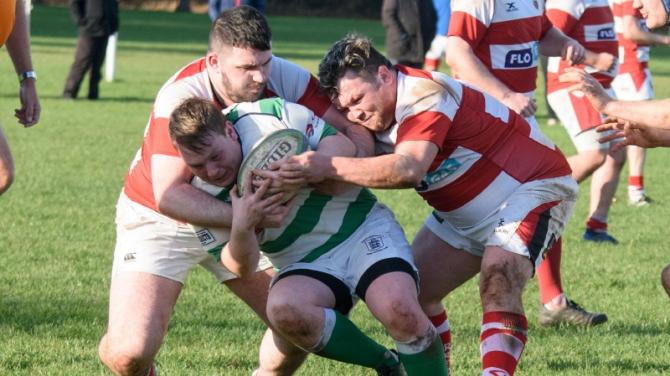 OMAGH Seconds made the long journey back to Tyrone on Saturday after suffering a comprehensive defeat at the hands of Randalstown in the Conference League.

Town’s team contained a number of young players getting their first outing for the First XV .

Omagh had the best of the early exchanges and were unlucky not to score in the first ten minutes,

However, the home side began to take the initiative and wing Dan McGlade used his speed and skill to open the scoring with a well-taken try which centre Conor Murray failed to convert.

Centre Ryan O’Dea then found an opening in the Omagh defence to go through for a try which Murray converted.

Randalstown continued to apply the pressure and Murray’s well-taken try which he himself converted took the score to 19-0.

Ten minutes before half-time the homeside relaxed and allowed Omagh in for a try which was converted leaving the score 19-7 as the interval approached.

But full back Mike Smith got a well taken try on the whistle to leave the score 26-7 after 40 minutes.

The second half was a disappointment with neither side able to score, their causes not helped by numerous handling mistakes.

Omagh began on the offensive and poor defence allowed the visitors in for a second try to reduce the deficit to 26-14.

The game began to open up in the last 15 minutes and this allowed prop Matty McBrien to side-step the Omagh defence and crash over the line to make it 33-14.

The final score of the game went to McGlade who scored a try after good work by fellow wing Coby Mason.

This Saturday, Randalstown go in the search for league points at old rivals Ballymoney.

Ballymoney have had an inconsistent season so far with their most recent result being a narrow 10-14 home defeat to new league leaders Limavady.

They sit in fifth, one place and seven points below Randalstown but with a game in hand.

They have won two and lost two this season with impressive 50-5 and 26-5 victories against Lisburn and Ards respectively coupled with a 19-39 loss against Lurgan and the afore-mentioned Limavady reversal.

Regardless of these results, a trip to Ballymoney is never an easy task.