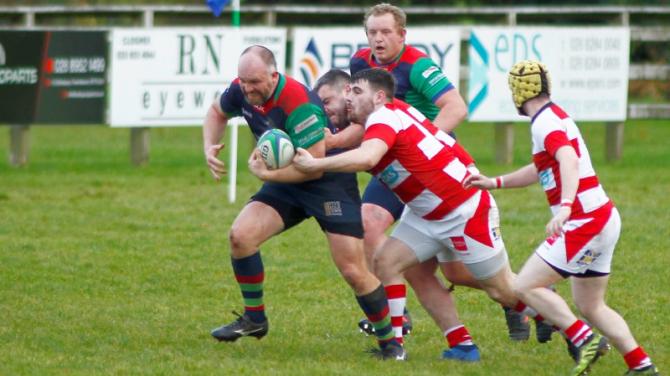 RANDALSTOWN made the long journey to Fivemiletown on Saturday to take on Qualifying League 2 leaders Clogher Valley who before kick-off had been undefeated in the league after five games.

However following their hard-earned, thoroughly deserved victory it is Randalstown who now head the table.

Randalstown started well with good possession but typically stout Clogher Valley defence meant that few scoring chances were created. The home side through their powerful runners and good lineout then began to assert themselves and take control that allowed their backs to score a well-taken try in the corner after 25 minutes.

Randalstown were then forced to defend for the remainder of the half.

They were doing this successfully until a powerful maul from the home side saw them go over for a five-pointer to open up a 12-0 advantage. This would be enough for some teams to let their heads drop but not Randalstown.

The visitors thought they had scored a try after some poor Clogher handling in their own 22 and then behind their try line but the referee brought play back for an earlier knock-on.

With half time approaching Randalstown were awarded a penalty and out half Martin Connolly opened the visitors’ account with a superb kick from 40 metres to make the score 12-3 at the break.

It was crucial to get off the board before the interval as it gave Town a foothold in proceedings as well as a confidence boost.

The second half was a bruising affair with both teams giving their all in an exciting contest.

As the game progressed Randalstown began to take control and their hosts were under increasing pressure especially in the scrums.

Two more well-struck Connolly penalties cut the home side’s advantage to just three points and then with 10 minutes remaining a fourth Connolly penalty from near the half way line levelled the scores at 12-12.

As the clock wound down it was all Randalstown and when they drove their opponents off their own scrum ball the plays that followed resulted in a scrum award a few metres from the try line.

In what proved to be the final play of the match, Randalstown produced a huge drive that allowed Captain and number eight David Smith to touch down for the winning try.

The celebrations from the large travelling support went unnoticed by Connolly who completed proceedings with the conversion to give Randalstown their first ever win over Clogher Valley.

Credit to Clogher Valley for their part in a great game and no doubt they will look to get their revenge in Randalstown come February and will be there or thereabouts come season’s end.

The First XV now have a break of two weeks before the next league game against Larne in which to recover and to also work on improving various aspects of their game.

Randalstown Rugby Club would like to thank Clogher Valley, The Jubilee Bar in Fivemiletown and Portadown Rugby Club for their hospitality before, during and especially after Saturday’s match.

*This Saturday Randalstown Rugby Club will be showing the Ireland v New Zealand test match (kick off 7pm). Burgers will be available for those with a ticket that also entitles them to a drink of their choice from the bar. Tickets are priced at £10 each and can be purchased from Alistair Strange.