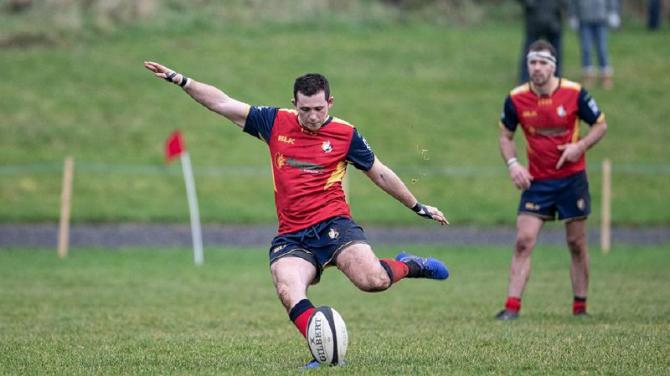 FOR the third week in succession, Ballyclare rugby supporters were treated to a high quality home fixture.

On Saturday City of Armagh Second XV were visitors, and with the Autumn Internationals it was a rest week for the All Ireland League, allowing Armagh to field their strongest XV.

Ballyclare made some changes, with Joel McBride and Willie Stewart unavailable in the backline, as well as Robert Boyd in the forwards.

Gary Clotworthy partnered Lewis Cahill in the centre, the former Ballyclare High School player given his opportunity in the starting line-up.

Niall Lawther took the full-back berth, with Willie Logan lending his experience in the pack.

On a still, overcast day Armagh started intensely. They took a 10-0 lead in the first quarter, through two unconverted tries.

Play for the first score started inside their own half. Working the ball up the pitch, with fast recycling at the breakdown and great handling the visitors found gaps in the Ballyclare defence.

Their second try movement started with a lineout on the 22. Armagh secured the ball and play progressed left, infield.

The play switched direction as they attacked down the right blindside. A tackle attempt was missed leaving the gap to score.

Ballyclare hit back with a try from Niall Lawther. From a lineout on the left side of the pitch, Ballyclare mounted an attack. The ball was carried well by Gary Clotworthy on the left and at the breakdown swept right.

Lawther hit the line, cutting through the Armagh defence cutting in, in goal for the easier conversion. Robbie Reid slotted the conversion. 7-10

Armagh had great pace in the backs, their full back particularly a threat, with the ball in hand.

As the game approached half-time, Ballyclare had Armagh under pressure in the shadow of the posts.

But the visitors’ defence held strong, until penalised, allowing Reid to strike a penalty to tie the score at 10-10.

A shoulder injury to Lewis Cahill saw him leave the field with Sam Caldwell coming off the bench.

In the final play of the half Ballyclare kicked to the corner for a lineout. The ball was secured and passed out the back. Clotworthy again made ground with the line in sight. At the breakdown, Paul Robinson picked up and continued the drive for the line.

Scrum half Andy Eastop spotted a gap at the edge of the ruck and darted in to score Ballyclare’s second try, just to the left of the posts. Reid again added the conversion for a half-time Ballyclare lead of 17-10.

Armagh struck a penalty from in front of the posts to pull three points back early in the second half.

Owen Kirk received a yellow card when the referee decided his knock on was intentional. Armagh kicked the resulting penalty to pull back within one. 17-16

A break by Armagh looked to be heading for a certain score but Robbie Reid chased back to tackle, Armagh were penalised at the breakdown allowing Ballyclare to clear.

Armagh regained possession and scored again to regain the lead 17-23.

Ballyclare then had Armagh under pressure inside their 22. Following a series of rucks where the ball was recycled but failed to make any real progress towards the line, wide left, the ball was moved right through the backs.

A slow pass by Lawther was intercepted by Armagh and ran the length of the field for a try between the posts.

The conversion put Armagh into a 30-17 lead.

With the game heading for full-time, Ballyclare responded with a well-taken second try of the day for Lawther wide right.

The excellent conversion kick by Reid gave him a 100 per cent record with the boot on the day.

The extra two points pulled Ballyclare back to 24-30 and a losing bonus point to consolidate their position at the top of the Conference League. Ballyclare now have a five-point advantage over Armagh in second place, with three games remaining until the conference league finishes on December 29.

Good news at the end of the game was Cahill returning from hospital with no long-term damage.

Ballyclare now have a week off before travelling to Shaws Bridge for the eagerly anticipated game with Instonians.

They will have McBride and Stewart back in the squad as well as the returning from injury Stuart Cusick.

*Ballyclare Fourth XV travelled to Bangor for a league game against the home club’s Third XV.

Tries for Paul Morrow, Chris Coburn, Ian Heaney and Chris Jones as well as a penalty and conversion for Dave Crawford and a conversion for John Wasson gave the Fourths a 27-17 victory.

The team also benefited from a man of the match performance from Steve Bailie.

They were competing well at 21-21 at half-time but the homeside pulled away in the second-half to win 49-28.