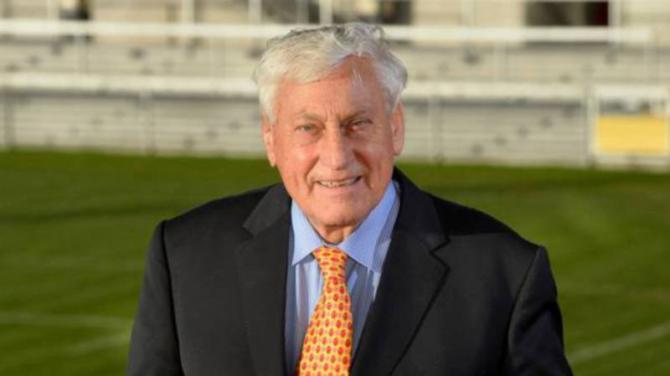 RUGBY legend Willie John McBride is celebrating as 2019 dawns after being awarded a CBE in the New Year’s honours list.

The prestigious Commander of the British Empire title is awarded for having a prominent but lesser role at national level, or a leading role at regional level.

Born in Moneyglass and now living in Ballyclare, Willie John played 63 times for Ireland - 12 of them as captain - in a 13-year international career lasting from 1962-75.

But he will forever be associated with the British and Irish Lions, with whom he toured five times and won 17 caps.

Although he had to play nine Tests before tasting success, he was a key member of two of the most successful tours in the history of the Lions - New Zealand in 1971 and South Africa in 1974.

Against the All Blacks he was pack leader.

In South Africa three years later he was captain of the team and led his squad to an unprecedented unbeaten tour and a series win.

Incredibly, McBride did not pick up a rugby ball until his late teens.

After his father's death when he was not even five years old, he spent most of his spare time helping out on his family farm.

The young Willie John, his two elder brothers Robert and John, and sister Sadie had to grow up fast, assisting their mother to keep their 50-acre farm afloat.

He credited those years of early graft for giving him the physical and mental toughness he needed to excel in sport.

With no gyms and farming being much more labour intensive, without even a tractor to drive, his agricultural upbringing was a vital key to his success on the field.

“You developed this thing, that you don't give in,” he said last year.

“You didn't stop when a job was half done.

“Learning how to cope with the disappointment of losing, that's very important.”

By the time he was 21 he was already a full international and had played his first two tests for the Lions against the Springboks in 1962.

He is known as being a genial man off the field, regularly disarming hotel managers who were irate at the behaviour of some of the players.

But on the field it was a different matter, especially on that 1974 tour and the infamous '99 call', a signal for the Lions to get their retaliation in first.

This meant that if one team-mate found himself in trouble, the rest would pile in and get involved in any fights and scuffles that broke out.

Speaking in an interview in 2018, he said: “Nobody was sent off in those days,

“There were no yellow cards, no television match officials or interfering touch judges - we had to sort ourselves out and it wasn't a game where bullies survived.

“If there were bullies on the field they were dealt with very quickly.

“My attitude was, ‘We’re not going to have this’.

“And if this happened we'd sort it out right away and get back to playing rugby.

“It only happened about three times and then the South Africans realised you don’t mess around with these guys so it's not worth getting mixed up with them.”

McBride also tasted success with Ireland, notably in their first win against the Springboks in 1965 and when Ireland beat Australia in Sydney - the first time a Home Nation had defeated a southern hemisphere team in their own country.

McBride retired from international rugby in 1975.

Fittingly he scored his only try for Ireland in his last international at Lansdowne Road against France although his final game would be against Wales in Cardiff.

He then went in to coaching and guided the Ireland team for a period.

The local man also managed the 1983 Lions tour to New Zealand which, it is fair to say, was not as successful as his playing experiences there in 1971.

In 2004 McBride was named Heineken Rugby Personality of the Century by Rugby World magazine and in 1997 he was an inaugural inductee into the International Rugby Hall of Fame.

He was awarded the MBE for services to rugby in 1971.

In 2017, he told of how he thought terrorists would murder him during the worst days of the Troubles, following the death of his friend and Ulster rugby second row team-mate, John Haldane.

The building contractor was gunned down by the IRA at his Duncrue Street office in Belfast's docklands in September 1991.

At the time, he held a senior management position with the Northern Bank.

He released an autobiography ‘The Story of My Life’ in 2004.

In 78 years, he has gathered up quite a number of anecdotes.

Following the death of New Zealand stalwart Colin Meads in 2017, McBride told of the day he clashed with a fellow giant of the sport during a test in Dublin,

“He liked to test younger guys out and being of Irish temperament, I didn't take too well to that,” he said.

“I gave him a bit of a lash and he ended up on his backside.

“One of our players grabbed me and said ‘Do you realise who you've hit? Oh my God you’ve hit Colin Meads - now we’re all dead.”

But McBride and Meads became great friends, staying at each other's homes.

“No matter how hard he had been knocked down or roughed up he would always bounce up and be back in your face,” he said.