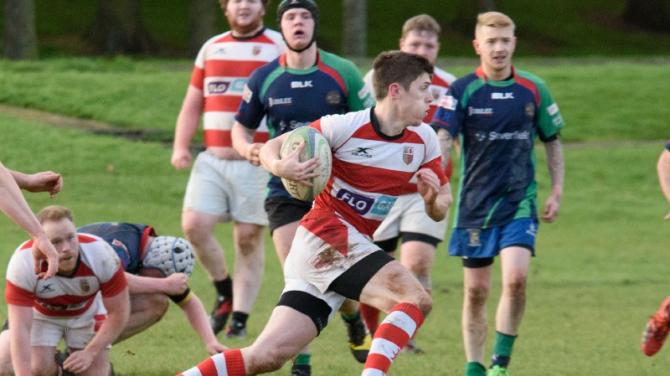 BRYAN Gourley was the star of an impressive 35-0 win as Randalstown’s Third XV entertained their Clogher Valley counterparts at Neillsbrook on Saturday.

Playing out of position at out-half Gourley was instrumental in four of the five Randalstown tries, touching down twice himself.

Despite a bright opening by the home side the first points did not arrive until half hour into the game and then there was a flurry of scores, with three tries in a 10- minute spell.

From a scrum just outside the Clogher ‘22’, Gourley broke through the visitors’ defence to send full back Sam McDonald through to score the opening try. McDonald added the conversion to make the score 7-0.

With the home pack now well on top, they created a platform for Gourley to dance his way through to score his first try of the game. McDonald slotted the conversion to double Randalstown’s advantage at 14-0.

Minutes later on the half time whistle Gourley demonstrated his strength bouncing through three would-be tacklers to slide in at the corner flag.

McDonald successfully added a difficult conversation to send Randalstown into the break with a 21-point lead.

The home side, as is their norm, started the second half slowly and it took them until the 65th minute to get the bonus point try.

After centre Stephen Irvine had gone close twice, it was Miguel Conceicao who capitalised on a loose ball on the visitors’ ‘22’. He gathered and crashed through the Clogher defence which along with McDonald’s conversion took the score to 28-0.

As the game entered its final few minutes, Irvine got his deserved score. Gourley again was the instigator with quick hands sending Irvine away down the wing to slide in. McDonald kept up his perfect conversion rate with the last kick of the game leaving the score 35-0.

*This weekend both the First and Second XVs are at home on Saturday afternoon.