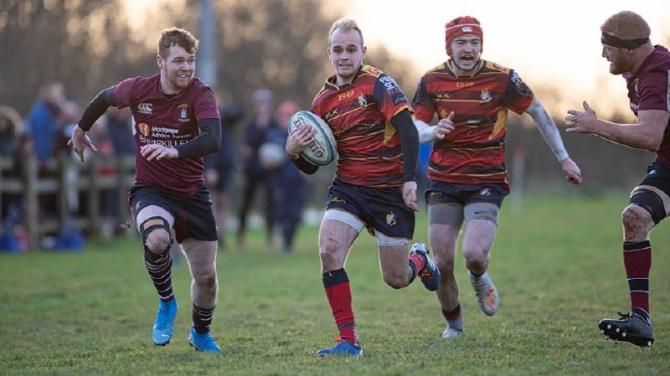 BALLYCLARE bowed out to Enniskillen at the last four stage of the Junior Cup on Saturday - their first semi-final in the competition for five years.

On a bright, cool day Ballyclare started brightly with a superb kick off chase and catch by Michael Kirk. Ballyclare went through a few phases progressing towards the Enniskillen line before losing possession, conceding a penalty at the breakdown. Enniskillen progressed into Ballyclare’s half and when awarded a penalty on the edge of the 10 metre line just to the right of the posts, elected to kick at goal.

The kick was good, giving Skins a 3-0 lead on five minutes.

On 15 minutes Ballyclare had the ball on the half way line.

A pass under pressure didn’t go to hand and was scooped up by the Enniskillen winger who ran in to score. The conversion was added giving Enniskillen a strong 0-10 lead.

Most play in the first half was within the middle third of the pitch.

Pressure increased on the home side with yellow card for Aaron Playfair for infringing at a maul.

Enniskillen’s pack had the upper hand in the scrums throughout the game, Ballyclare being penalised several times. Enniskillen kicked another penalty in the last few minutes of the half to lead 0-13 when the whistle sounded.

Pressure inside the Enniskillen on 10 minutes in the second half saw Ballyclare awarded a penalty in front of the posts. Matthew McDowell slotted over to put Ballyclare on the scoreboard.

Ballyclare rallied well and were starting to put some fluent attacks together.

When Enniskillen knocked on, inside Ballyclare’s 22.

Ballyclare looked to clear from the scrum, however Skins shunted Ballyclare off the ball allowing their number eight to pick up and attack round the edge of the scrum.

A missed tackle saw the number 8 crash over the line just to the left of the posts.

The conversion was added, stretching Enniskillen’s lead to 3-20.

In the final 10 minutes as at Mullaghmeen a few weeks earlier, Ballyclare laid siege on the visitor’s goal line, being held up on one occasion.

A determined, committed defence held them out.

A final penalty to Enniskillen saw them deserved winners on the day 3-23. The Ballyclare man of the match award, sponsored by Robin Byers, was awarded to Matthew Coulter.

*This weekend will see Ballyclare’s fourth home league fixture in a row - a return to league action.

Cooke will be visitors for Ballyclare’s annual Christmas Jumper day, where a large crowd is expected for traditional Christmas fayre and to support the team in their last home fixture of the year.

*Following a couple of bad results the Second XV had a morale boosting win away to Dungannon Second XV.

The Ballyclare side scored six tries in their 36-29 victory.

*The Third XV got back to winning ways in the league, following a three-week break, away to Portadown in perfect rugby conditions. With no other senior teams playing at Chambers Park, the battle of the Third XVs took place on the Portadown main pitch.

Ballyclare started well but infringements give the ball back to Portadown who could clear there line on four occasions.

The pack were enjoying the contact and after a scrum against the head and several surges, Mark Eccles powered over the line for the first score with Chris Gillen adding the extras, 7-0.

Unfortunately the game had to be stopped for 40 minutess after a head injury was sustained by substitute Adam Elliott.

Thanks must go to Stevie Goudy who helped to get him off the pitch and assisted until the ambulance arrived.

The good news was that he was released later that night from Craigavon Hospital with no serious injuries.

The game resumed with the start of the second half and play progressed like it had not stopped with Callum McComb quickly adding the fifth try which takes his personal tally to 12 for the season.

Gillen added the conversion to put Ballyclare 33-0 up.

Nick Beattie and Stuart Gilmore added further tries in between a Portadown score to finish the game 43-5 winners.

Another great team performance after a break and good momentum going into a busy December.

Special mentions must go to Phil Moan, Mark Eccles, Darren Montgomery and the returning Jack Goudy in the pack.

Callum McComb and Stuart Gilmore had good games in the backs.

*The Fourth XV went down 28-10 to visitors Academy Second XV for their second defeat of the season.

With the Third XV and Fourth XV competing in the same league, this Saturday sees the first head to head fixture. The Fourth XV are at ‘home’..