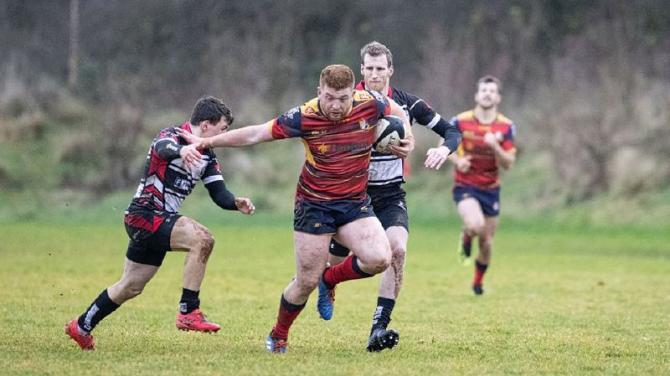 At the pre-match reception, match sponsors Caterserve and Coogan & Co along with members and supporters enjoyed a delicious hand-carved turkey and ham dinner prepared by chef, Laurence McSparron.

The match ball sponsor was Peter Caldwell. David Campbell sponsored the man of the match award.

All Ballyclare senior sides were playing at home, including the highly anticipated match between the Thirds and the Fourths.

Ballyclare’s First XV welcomed Cooke RFC to The Cloughan for their last home game of the year.

A morning of showery rain left a very overcast but dry afternoon with the floodlights on from the start of the match.

Cooke pressed deep inside the Ballyclare half in the first five minutes, but a stray pass was punished when Michael Kirk scooped up the ball and ran in, unopposed, from around Ballyclare’s 10m line.

Dotting down under the posts gave Matthew McDowell the straight-forward conversion to put the home side 7-0 up.

Cooke continued with some enterprising possession inside the Ballyclare half but the homeside were equal to the challenge, to keep them out.

At the end of the first quarter, Ballyclare retained possession at a scrum just inside the Cooke half, and went through a few phases until Michael Kirk made a break up the centre of the pitch before making a perfectly-timed pass to enable Joel McBride to surge through to score to the right of the posts.

The evasive McBride turned provider for a third Ballyclare try on 30 minutes when he broke through the Cooke line, passing inside to support runner Jack Black who scored under the posts and with McDowell adding a third conversion the scoreline now read 21-0 in the homeside’s favour.

When the ‘front-rower’ tells the story in years to come of ‘how I ran it in from the 22’ at least there were plenty of witnesses!

In the last minutes of the half, Ballyclare won the ball at a lineout inside the Cooke 22. The ball moved left to right, but full back Josh Cowan was stopped just short of the line.

Ballyclare recycled, the ball moved through nine and 10 to McBride, and his pass found Michael Kirk who went in at the corner for a fourth try which earned a bonus point and a 26-0 lead at half-time.

In stark contrast to the first period, Cooke dominated territory and possession for the majority of the second half with Ballyclare kept inside their own half for long periods.

Cooke retained possession well but could not find the decisive break as the Ballyclare defence held strong.

However, Ballyclare’s discipline slippedin the final 10 minutes when the referee showed three of the homeside’s players a yellow card in quick succession which meant they had to see out the rest of the match with 12 players.

But despite the best efforts of the Cooke players there were no further scores.

A strong first half performance sealed the bonus point win for Ballyclare who travel to Carrickfergus this Saturday, for the first of three successive away games in December.

Captain Dave Clarke had a great game along with James Douglas in the pack.

However with two tries and an assist, Michael Kirk was awarded the Ballyclare Man of The Match.

*The Second XV played out a very competitive game against a good Grosvenor Second XV but the visitors just edged it, 20-17.

*The game between the Thirds and the Fourths saw the Third XV come out on top, winning 24-10 and earning a bonus point to keep them top of the league.

After the matches the First XV squad enjoyed their Christmas dinner and there was definitely a festive vibe in the packed clubhouse.