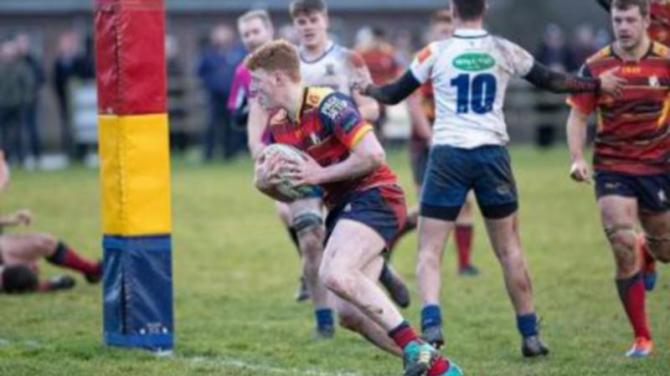 AFTER long months in limbo the mouth-watering prospect of sport returning is growing stronger by the day - and local rugby clubs are chomping at the bit to get back.

Over at Ballyclare RFC Head Coach, Mike Orchin-McKeever and assistant coach and former Ulster prop Ricky Lutton are rerlishing the prospect of getting the team back together again.

Both appreciate the value and need for fun, exercise and are keen to provide an environment for players to reconnect with each other.

“Little to no coaching and rather a focus on getting back to connecting with each other in person is the most important thing.” said Mike.

U20 rugby is a real focus for the coach. An initial period of two weeks will run from the April 13 on Tuesday and Thursday nights from 6pm to 7pm.

The club have revamped their Under 21 group chat to Under 20 and are hoping to have approximately 27 players involved -  and are calling out for more to get in contact with friends and play.

U20 Captain and centre, Matthew McCullough said it would be good to get the ball rolling.

“Personally, I am very excited to return to U20s rugby and I know a lot of the lads have been missing it as well,” he said.

“The fixtures we did get to play at the start of the season were great craic and it was nice to get play with old pals and new people which may not be playing in the same team as you on the Saturday or not playing at all at the weekend.”

Mike said it was an opportunity to blow away some of the cobwebs - and to get some important experience.

“All our players are important but those at U20 age are very inexperienced rugby players at senior level, having had little rugby in their first or second year out of Age Grade rugby.

“Now it is important to provide a safe environment for players to return, have fun in sport,  reconnect and just play.

“Sessions will be based on non-contact, lots of catch, pass, kick, run, chase, smile and laughs.

“We might even host some rounders, get the music playing and ideally get the BBQ lit, when permitted.

“After an initial two-week period, we will then open this group to those departing U18 Youth and School rugby to then transition into senior club rugby and begin making new friendships.”

Mike will oversee a project that will have assistance from Jamie Orr and Jordan McKinstry, along with young 1st XV players Ryan McIlwaine and Aaron Playfair.

Jordan McKinstry who coaches the club 2nd XV added: “It’s very important. The U20 aspect gives the players the opportunity to play with others of the same age which takes away the stigma of playing against grown men.

“It also helps create a social aspect as players can integrate into the club scene with others of the same age.”

Jamie Orr a teacher at Antrim Grammar expressed his views on staying on playing after U18 and school rugby.

“I feel the importance is to keep more players in the game as they move from age grade to adult rugby as it is essential to ensure the future health of rugby and clubs as a whole.

“A lot of players can get extremely attached to the group they’ve played with at underage for so long so it’s important we provide a platform for them to continue that to further expand into the adult game.”

The Touch Rugby games will become Gamified Rugby, to provide an opportunity to encourage players to be creative and be rewarded for doing so - something that excites Coach Mike.

“This has been explored at U12 and introduced to senior club training previously.

“Having revisited, shared ideas and stories with Gavin Hogg, Russell Earnshaw, John Fletcher and coaches within Ulster Rugby such as Budge Poutney, a former Scottish International, there is now opportunity to explore a better player centred approach to fit with the new different and new norms coming out of COVID to assist in the development of a more rounded player and hopefully create players who play in the in the moment and perform well in the uncoachable moments of a game next season and beyond.

“But most importantly have some fun.”