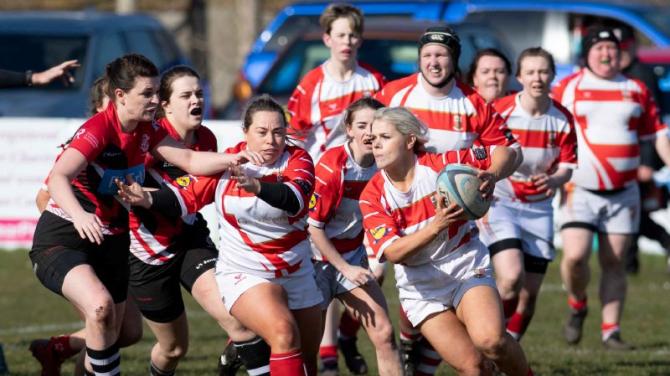 THERE was bitter disappointment for Randalstown’s Senior Women on Sunday in the final of the Suzanne Fleming Cup.

The squad travelled to Deramore Park for the big game against Cooke Seconds - and the girls knew they had a fighting chance of taking the title.

But things did not go according to plan.

Cooke got on the scoreboard early with an unconverted try just five minutes into the match.

The next 25 minutes saw possession switch back and forth between the sides, but each team’s defence proved too strong to penetrate until Cooke dotted down twice more in the last ten minutes of the half, this time adding both the conversions.

Randalstown came out fighting in the second half, and quickly got points on the board thanks to a try from Emily McIllroy that came off the back of great team plays.

Cooke responded by adding another converted try to their scoresheet.

Randalstown didn’t give up, however, and maintained possession for the majority of the half, adding another seven points through a converted try from Megan Finney.

Cooke though got the last say, scoring one last try to make the final score 12-31.

While the result may not have gone Town’s way, there were still plenty of positives to take for a side with a lot of players who have only taken up the sport this year.

Antrim Guardian photographer Dave Pettard was at the big game. See more of his explosive action shots on page 50.