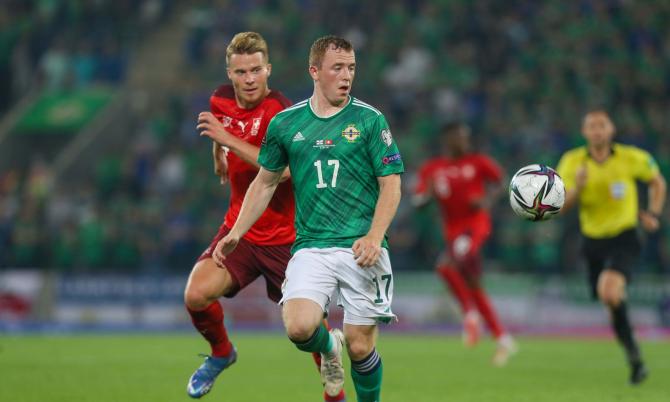 Northern Ireland would keep their World Cup qualifying hopes alive as they secured a point from their fixture against Switzerland this evening as 'keeper Bailey Peacock-Farrell saved a first-half spot kick.

Ian Baraclough made one change from the World Cup qualifying win against Lithuania as Cardiff City defender Ciaron Brown came into the heart of the defence at the expense of Paddy McNair who was suspended.

In front of a raucous crowd at Windsor Park, the hosts almost took the lead on nine minutes as a long ball forward by Craig Cathcart was expertly controlled by Shayne Lavery. The striker used his pace to escape the Switzerland defence but he blazed wide when through on goal.

The game would enter a bit of a lull as Jordan Thompson had a half chance saved but there would be a major talking point on 32 minutes as the visitors were awarded a penalty. A cross into the box by Denis Zakaria saw Michael Smith and Ruben Vargas collide with referee Harald Lechner pointing to the spot. The responsibility was given to Haris Seferovic but Peacock-Farrell would save his second penalty in as many games.

Just before the half-time whistle, Northern Ireland would have a let-off as Fabian Frei whipped in a teasing delivery and Manuel Akanji headed towards goal. Peacock-Farrell would get a hand to it but the ball landed at the feet of Nico Elvedi, who poked wide on the stretch.

On 49 minutes, the Swiss almost broke the deadlock as Vargas' outstanding delivery was just in front of the outstretched Akanji who would have surely converted had he made a better contact with the ball. Minutes later, Vargas curled the ball into the gleeful arms of Peacock-Farrell as Murat Yakin's men controlled much of the ball.

The Northern Ireland defence was superbly marshalled by Brown, Cathcart and Daniel Ballard with Switzerland testing Peacock-Farrell again as Ricardo Rodriguez's free-kick was comfortably gathered. The hosts brought on George Saville and Dion Charles for some fresh legs and the Kop shouted for a penalty as Ali McCann's cross struck Elvedi but the referee correctly ruled that it hit his thigh.

Baraclough's men looked threatening from set pieces but they failed to overly test Yann Sommer as the game finished goalless at Windsor Park. The Green and White Army travel to Switzerland and Bulgaria next month and they will hope to have Jonny Evans, Stuart Dallas and others back for selection.