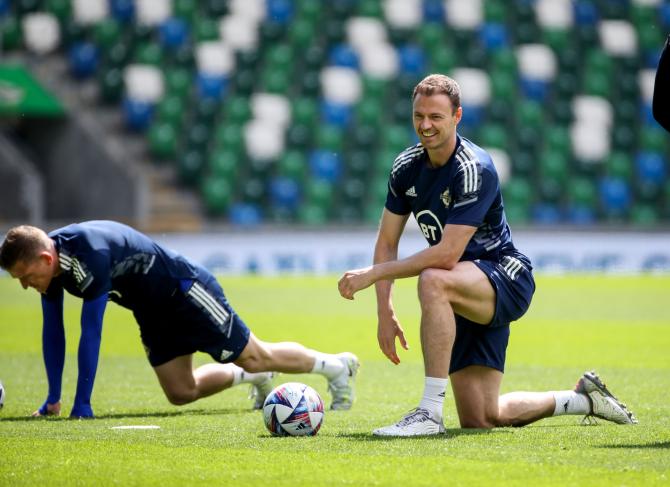 Jonny Evans during Wednesday's training session at the National Stadium at Windsor Park, Belfast, ahead of the UEFA Nations League game against Greece. Photo by William Cherry/PressEye

Northern Ireland go in search of their first ever win in the Nations League as they host Greece tonight at Windsor Park (KO 7:45pm).

The Green and White Army kick-start their campaign with the first of four games across a ten-day period as they also travel to Cyprus on Sunday (June 5) and Kosovo (June 9), before hosting the Cypriots on Sunday, June 12.

After eight defeats and two draws in 10 matches, with six goals scored and 18 conceded, Northern Ireland have dropped into tier three of the competition.

There could be debuts for four new call-ups as Huddersfield Town defender Brodie Spencer, Manchester City midfielder Shea Charles, Rangers midfielder Charlie McCann and Glentoran winger Conor McMenamin were all included in the senior panel for the first time.

There is no place yet again for Hearts pair Liam Boyce and Michael Smith, with Corry Evans and Craig Cathcart rested after long seasons with their respective clubs. Furthermore, injuries to Stuart Dallas, Jamal Lewis, Jordan Jones and Josh Magennis means they are not available for Ian Baraclough's side.

Steven Davis - who signed a one year contract extension with Rangers - is included, as is Kyle Lafferty who went on a goal scoring spree for Kilmarnock as he helped the Ayrshire side earn promotion back to the top flight of Scottish football.

"We are looking to build towards trying to qualify for a Euros next year. It's the start of the cycle and this is playing a big part in that," Baraclough said.

"Hopefully some of the new lads in the group are here to stay and they make such an impression that they will firmly be in our plans for the next two years.

"I have been forced into bringing certain newcomers in, but by no means are they out of their depth. With four games over a 10-day period many of them will be used.

"It's probably going to be our most difficult fixture," added Baraclough on the visit of Greece.

"Greece are a decent footballing nation, we know that, and I saw in their friendly games there was a renewed energy in there as well.

"We can only worry about ourselves and try to get that first win on the board and that sets you off on a good start for the following five games.

"I want four positive performances no matter what team I put out.

"It's not a case of throwing them in all at one time. We are going to try to win every game and that is a massive challenge for us."