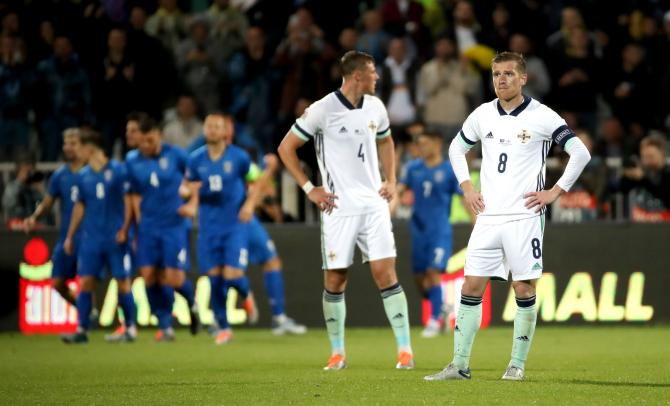 Northern Ireland boss Ian Baraclough targeted four wins from four in the Nations League quadruple header - but his best shot is just one after another defeat for his side in the competition.

The Green and White Army are now winless in 13 games in the Nations League after tonight's 3-2 defeat away to Kosovo, meaning they have just picked up one point from a possible nine so far.

The writing was on the wall for the visitors after just nine minutes as Vedat Muriqi scored an early penalty for the hosts in Pristina. Despite a good reaction to that goal, Northern Ireland were punished as Zymer Bytyqi doubled the lead ten minutes later.

An inspired performance from Bailey Peacock-Farrell was giving Northern Ireland a glimmer of hope and that would turn to be fruitful as they halved the deficit on the stroke of half-time. A deep cross from Brodie Spencer met Shayne Lavery and the Blackpool ace made no mistake from close range.

Kosovo, who came into the contest ranked 107 in the world, wouldn't have to wait long after the interval to regain their two goal lead. On 52 minutes, Lirim Kastrati got beyond Ciaron Brown, played a ball across goal and Vedat Muriqi was in the right place at the right time for his second goal of the night.

Baraclough's men were second best for the majority of the contest but remarkably they made it 3-2 on 83 minutes. A Jordan Thompson free-kick met the head of Daniel Ballard who found the bottom corner. Probably a fitting goal for the visitors' best player on the night.

That goal would make it one-way traffic for Northern Ireland as Conor McMenamin was denied by a brilliant block, before Ballard would threaten with another header.

That late flurry would still see Northern Ireland leave empty handed ahead of a must-win game against Cyprus on Sunday.