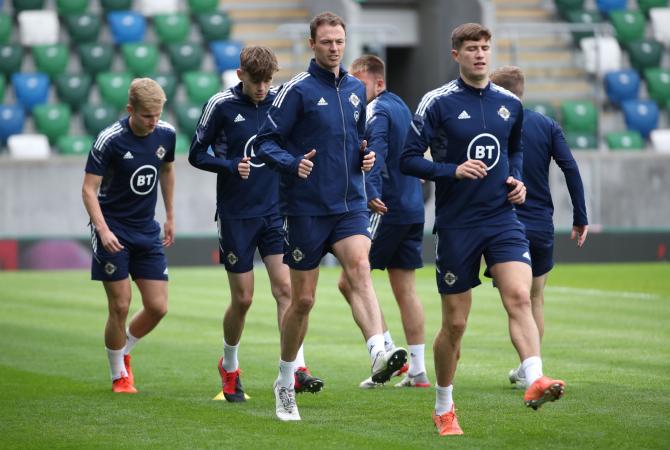 Under-fire Northern Ireland boss Ian Baraclough has called on fans to give the younger players in his squad a chance to develop after a winless start to this year's Nations League campaign.

Despite looking for a maximum 12 points from the quadruple-header this month, the Green and White Army only have one after defeats to Greece and Kosovo, as well as a 0-0 draw against today's opponents Cyprus.

Northern Ireland have found a win hard to come by in the competition as they look to make it a first success in 14 outings this afternoon, with fans singing "cheerio" at the manager after the 3-2 loss in Kosovo on Thursday night.

Baraclough was quick to point out that football is a results-based business but knows his squad will be stronger for the next international break in September.

“It’s part of my job to make sure those kids are shielded from it and it doesn’t affect them, that they can go out and play their own game,” he said.

“Put the criticism on me. Don’t have a go at them. They’ve got to go and perform. This Northern Irish crowd have shown time and again their backing is there. I’ve got broad enough shoulders to take it.

“If they can do that we can be good enough to win the game.

“It’s one of those things, you’ve got to take the criticism as well as the praise. I never try and get too high and never get too low, I learnt that pretty quickly.

“The fans have got every right to say what they say. They turn up, pay their money and support the team. It’s disappointing to hear that, clearly. We’re in a rebuilding phase. No disrespect to the players that have come into the squad but there’s a lot out injured that would make us stronger.

“Come September we’ll be stronger for these games."

A win against Cyprus would help ease frustration within the ranks as the country also look ahead to the Euro 2024 qualification campaign.

“I and we don’t want to go into September mulling over having not got a win in any of these four games and thinking about it for four months,” Baraclough added.

Midfielder George Saville will be absent after withdrawing from the squad through injury.